Oil prices and global stock indices have surged this month on the hopes that additional US fiscal stimulus and the successful distribution of COVID-19 vaccinations will hasten a return to normalcy in the not-so-distant future.

The rally is building on the gains realized since November, when a similar narrative pushed up commodity prices and equity indices.

But has anything changed to suggest an improvement is actually underway? Are higher valuations justified according to fundamental data?

In this blog, we shed some light on these very difficult questions, drawing on the following datasets created by Ursa Space based on satellite radar imagery.

Here are five graphs to help make sense of the world: 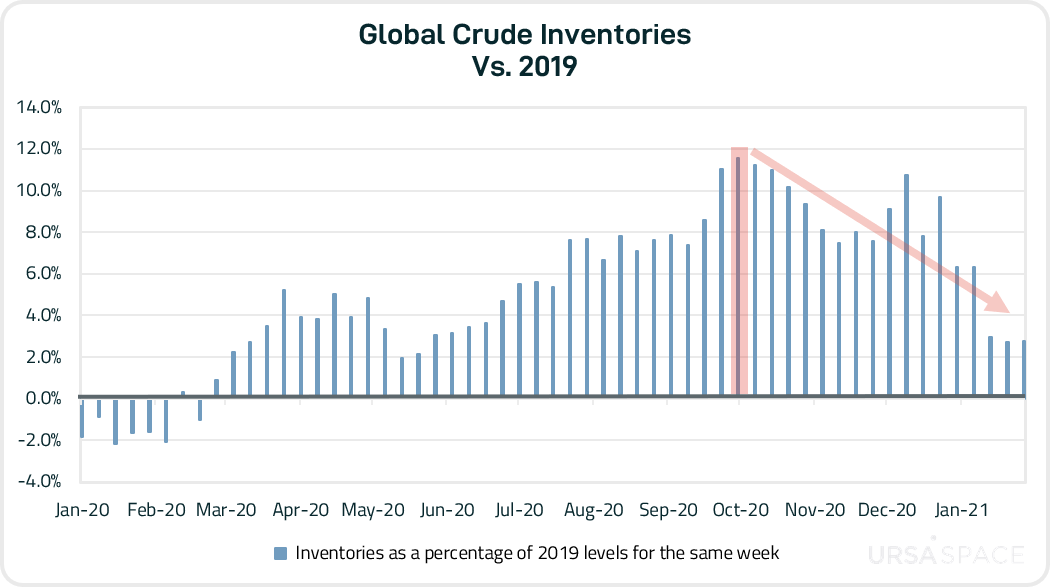 ICE Brent, the global oil benchmark, has been rising steadily over the last three months and counting. ICE Brent closed above $60 per barrel on February 8 for the first time since January 2020. At that time, prices were headed in the opposite direction, as the full extent of the coronavirus outbreak became known.

Global crude inventory data confirms the oil market has tightened. After a period of large builds in 2020, caused by a precipitous drop in fuel demand, inventories turned a corner and began to draw down steadily beginning in October.

Graph 1 shows global crude inventories from January 2020 to January 2021, as measured against 2019 levels for the same period.

On this basis, inventories have been in positive territory (i.e., surplus) since late February 2020, but that surplus peaked early October (highlighted in red) and has shrunk considerably.

Graph 2 shows why this is important: 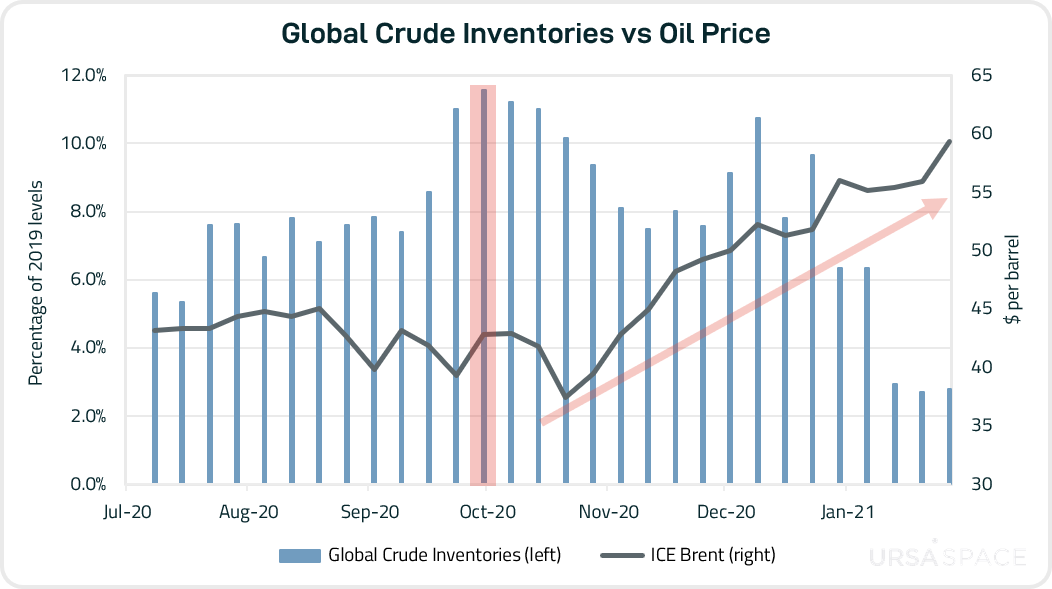 In November 2020, oil prices finally broke above the low-$40/b range where they had been stuck since early summer. This was approximately 1 month after the inflection point when inventories began to decline, described above.

It’s an example of how crude oil inventory data can inform trading strategies. Oil prices in the short-term can be influenced by noise, but the direction over the medium- to long-term is mostly dictated by the supply–demand balance (i.e. inventories).

If the current trajectory holds, global oil inventories will soon fall below 2019 levels, but that depends partly on the extent to which US oil output can rebound. 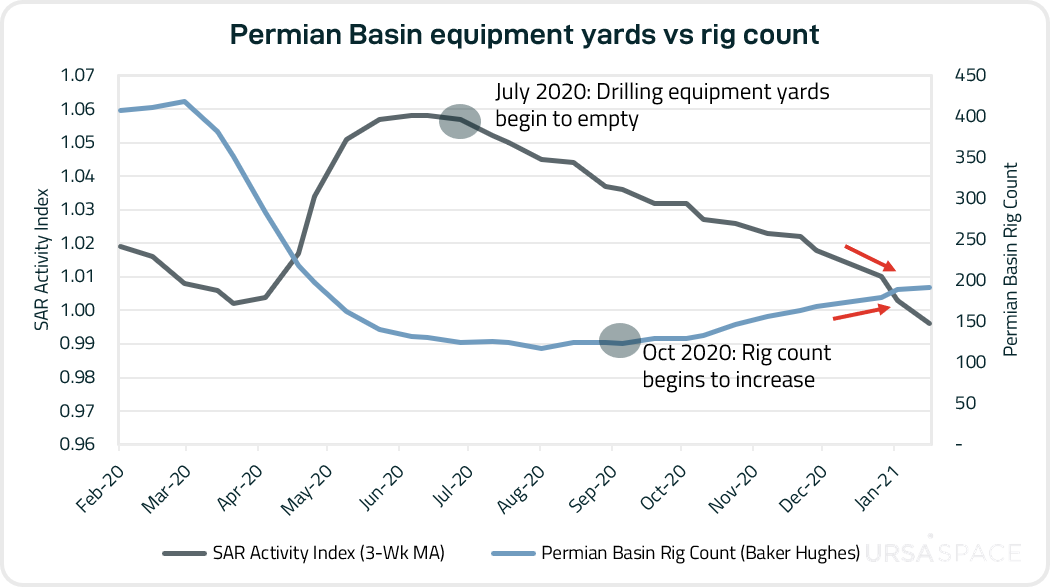 Higher oil prices have revived interest in the Permian Basin, the epicenter of US shale oil production, after a crippling period in 2020 when the industry laid off thousands of workers and idled hundreds of drilling rigs.

Much of this drilling equipment ended up in storage yards across West Texas, collecting dust until a sense of optimism returned to shale oil companies.

Ursa Space’s Permian Basin activity index measures the fullness of these lots — the score rises when more equipment is stored and drops when equipment leaves (i.e., dispatched to the oil field)

After a significant increase in April-May, the activity index began to decline in July, suggesting some of the drilling equipment was being redeployed.

That was confirmed 3 months later when the Baker Hughes rig count showed the number of rigs active in the Permian Basin was starting to increase.

The Permian Basin activity index has continued to fall into early 2021, suggesting the rig count (and therefore, oil production) is likely to keep rising.

What about oil demand? The outlook hinges mostly on the speed and breadth of economic recovery, a matter addressed in the next two graphs. 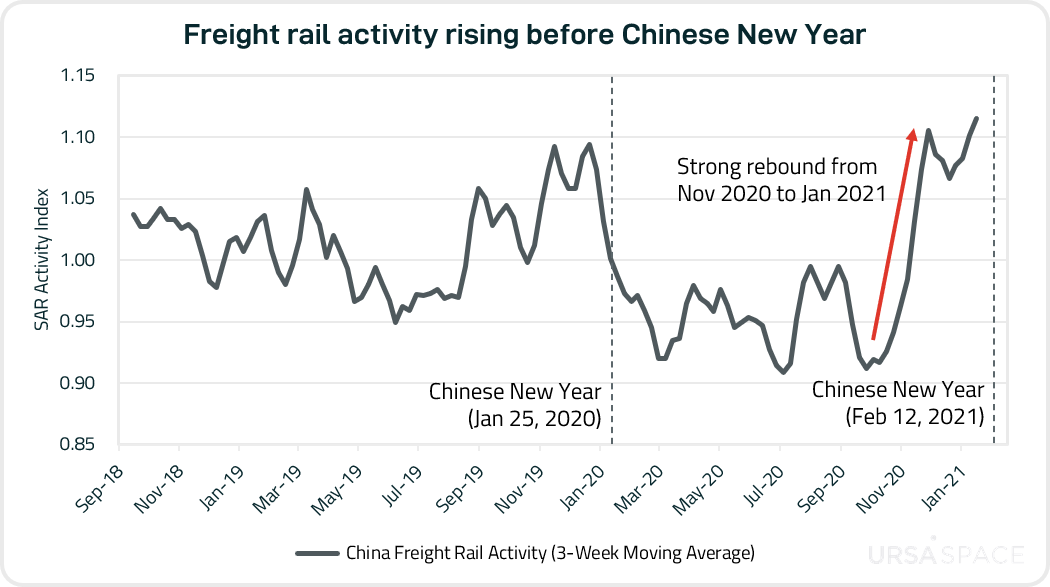 Rail networks are the arteries and veins of the economy, carrying goods (e.g., food, household items, coal, iron ore, automobiles), across land, much as the body’s blood vessels carry oxygen throughout the body.

One of the first signs of lessened demand for these goods is the slowdown in freight rail transport, a situation we observed in 2020 when monitoring the impact of COVID-19 restrictions in China.

There was a sharp drop in activity at Wuhan North Railway Station, the main freight yard in Hubei Province, from January to March 2020, which then rebounded after travel restrictions were lifted in April.

An index of major freight rail stations across China (Graph 4) shows a sharp drop from January to March 2020, followed by a period of low, but stable, activity until November when the score shot higher.

This trajectory has continued into early 2021, buttressed by the Chinese New Year, though celebrations will be more subdued than normal, assuming people follow official orders to stay home to prevent the spread of COVID-19.

Still, oil consumption in China during the first quarter is forecast to top year-ago levels by 2 million to 3 million barrels per day (bpd).

What about the rest of the world?

5. Global auto manufacturing: Brazil vs. China vs. US 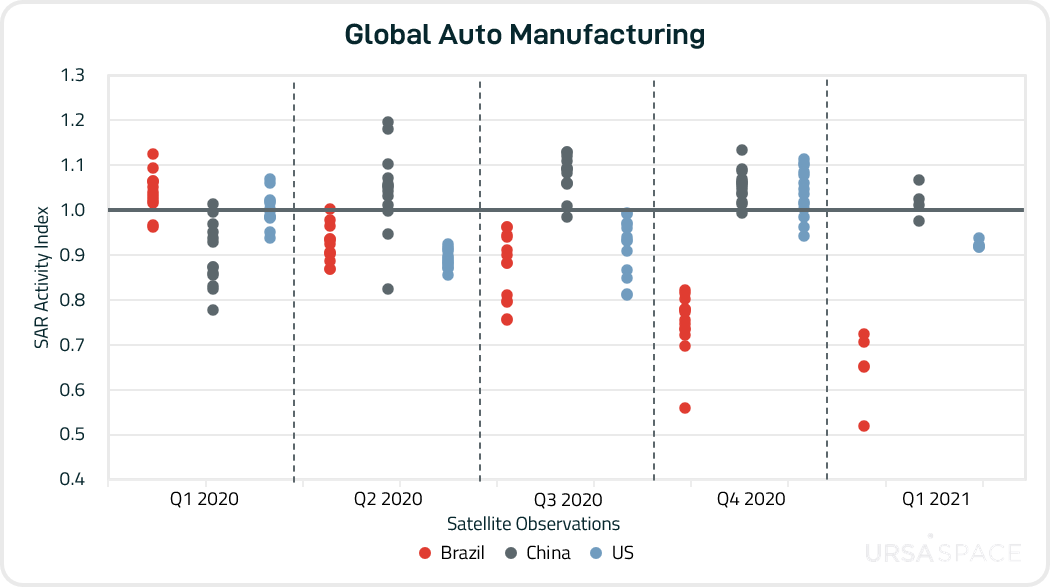 It’s safe to say that the return of normalcy might be coming, but won’t necessarily arrive at the same time in every country.

Graph 5 shows auto manufacturing indices for Brazil, China and the US since the start of 2020. All the weekly scores for a country are grouped by quarter to get a sense of trends over time.

While China and the US both rebounded, Brazil has continued to drop each quarter, a troubling sign, particularly if representative of emerging markets.

What do you think? Are higher commodity prices and equity indices underpinned by economic strength? Or is a market correction the next domino to fall?

Contact us for a free sample of our data.