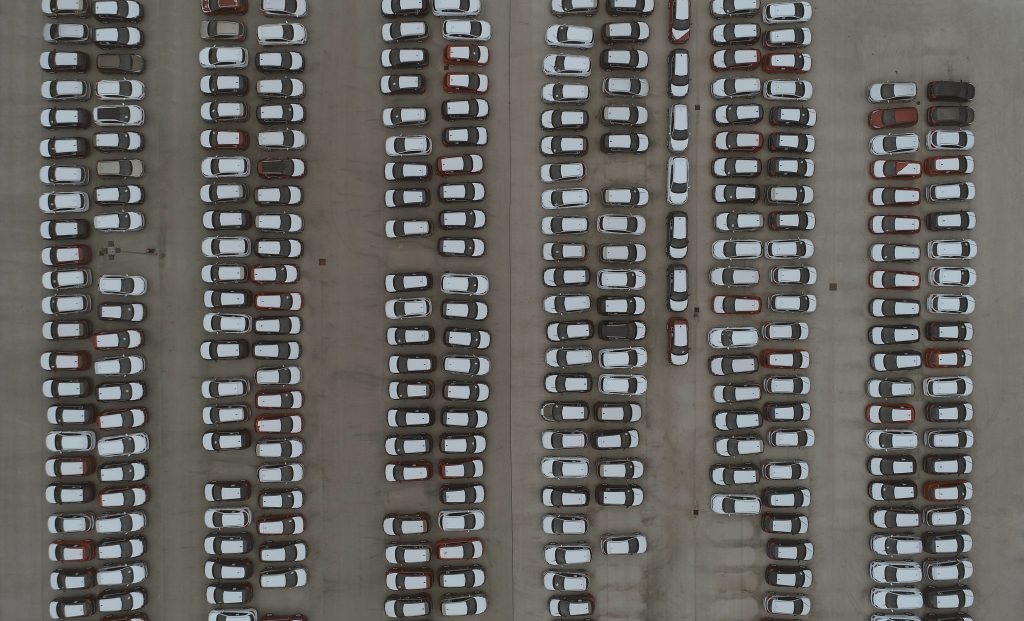 A shortage of semiconductor chips and explosive growth of electric vehicles emerged as arguably the two biggest stories in the global auto industry in 2021. The odds are strong that they will dominate headlines again in 2022.

So, if you wanted to get ahead of the curve and know more about what’s happening, where would you look? Are there particular factories or inventory lots that could reveal major clues?

Let’s start with the shortage of semiconductor chips, a legacy from the early days of the COVID-19 pandemic that has yet to fully resolve itself, causing massive headaches for auto manufacturers, all of whom need these critical parts to build today’s fleet of vehicles.

But rather than cut production levels or shutter assembly plants, some companies have decided to keep humming along, moving vehicles that are all but complete (except for the missing chips) away from the factory and onto separate lots.

Here, these vehicles sit until the day comes when they can be brought back to the factory floor and outfitted with semiconductor chips.

Car manufacturers have been forced to look far and wide for possible locales to temporarily store vehicles. Lots have sprouted up practically overnight, transforming university campuses, racing tracks and vacant blocks into symbols of the global supply chain crisis. 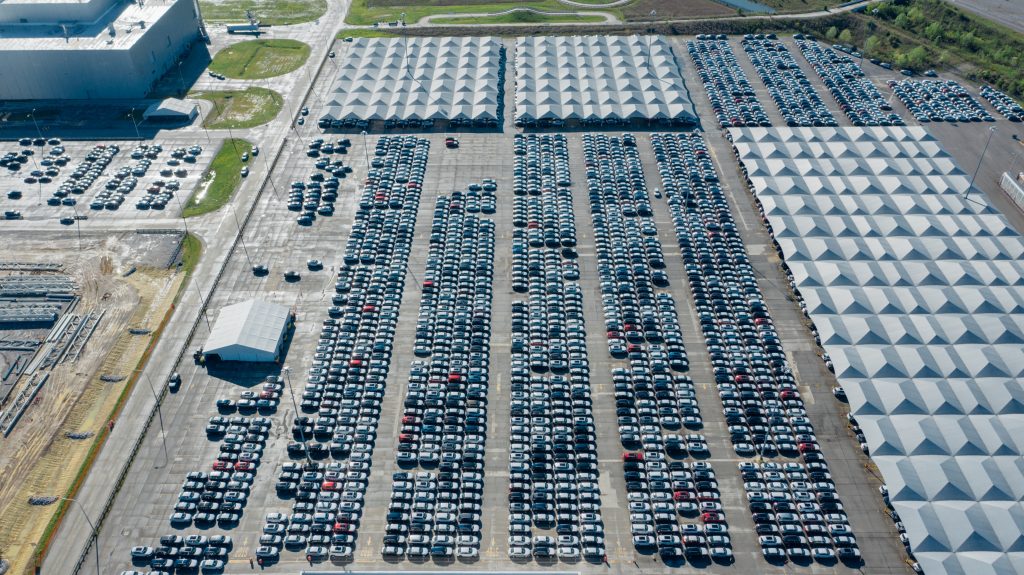 By monitoring these overflow lots, you can also gain additional insight into the situation. Are more or less vehicles being stored there? The answer reveals whether the semiconductor shortage is improving or worsening.

Ursa Space’s customers now have access to this very intelligence after we added coverage of overflow lots to our existing monitoring of global auto manufacturing facilities.

The overflow lots are in California, Ohio, Indiana, Michigan and Missouri. We utilize satellite imagery to quantify the level of fullness for each lot, the same technique used to calculate our Global Auto Manufacturing Index (AMI), described in earlier blogs.

A few takeaways from the data include: 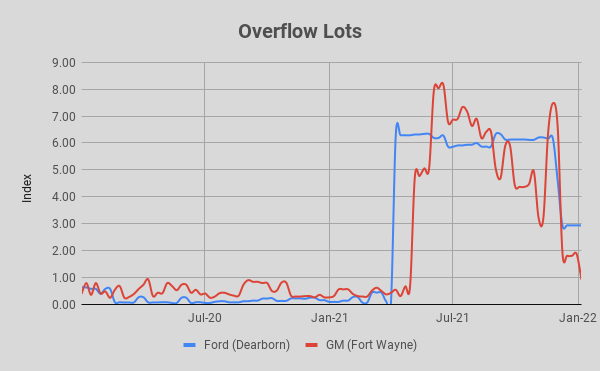 This data from late 2021 showing some overflow lots becoming less full suggests the situation may have improved slightly, with more vehicles being brought back to the factory floor presumably because semiconductor chips were available.

Ford decided to take matters into its own hands, signing an agreement with a semiconductor supplier to design and develop chips for Ford vehicles. 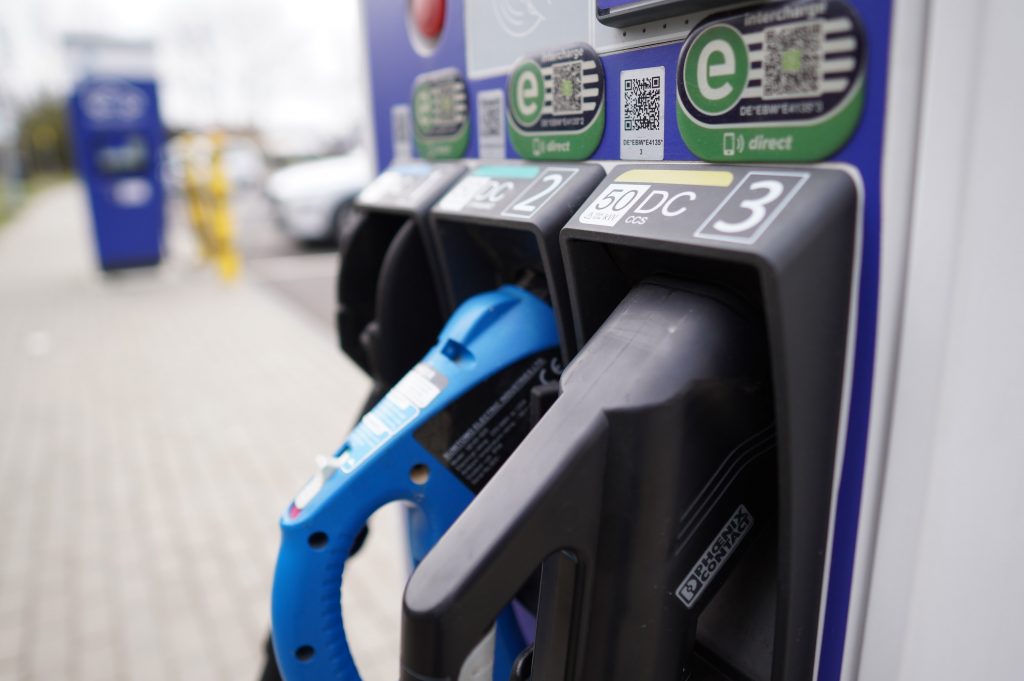 Demand is also set to increase alongside the anticipated growth in electric vehicles, which require roughly double the number of chips as a non-electric vehicle.

With the spotlight shining brighter than ever on this segment of the auto industry, Ursa Space recently expanded coverage of EV manufacturing in China, the world’s biggest producer of electric vehicles.

We added factories in China operated by Fujian Motor, SAIC Motor, JAC Motors and Mercedes-Benz. This is in addition to our existing coverage of EV plants in China, which included FAW-Volkswagen, SAIC-GM and Tesla.

Some observations from the data include: 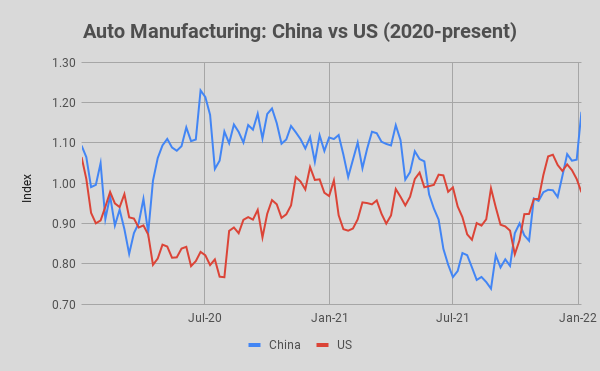