After an isolated outbreak of COVID-19 cases in the export province of Guangdong led Chinese authorities to impose new restrictions and testing protocols, a cascade effect followed that had implications not only for China, but also for the rest of the world.

The disruption was visible in China economic data, which might not have been panic-inducing, but still pointed to worsening conditions.

Even before the data was released, a downturn was apparent in China’s automotive industry.

The China AMI recovered from coronavirus lockdowns in early 2020, and stabilized for the remainder of the year and into 2021. In May 2021, before the decline began, China’s AMI was slightly above the average levels for 2016 to present.

This trend was confirmed by the Caixin/Markit Purchasing Managers’ Index (PMI), which showed:

A score of 50 is the dividing line between expansion and contraction. Even though the June reading stayed in expansion territory, all eyes will be on the July survey to see whether this changes or not.

The recent downturn has been notable for the precipitous drop, corresponding with a range of issues wreaking havoc.

At the top of the list is the global semiconductor shortage, a problem facing automakers around the world in 2021, including China, the world’s biggest car market. Other contributing factors could include higher raw material costs and supply chain disruptions.

Another issue was the grounding of the Ever Given container ship in the Suez Canal, which upended commercial shipping for weeks, if not months.

Next, a COVID-19 outbreak in Shenzhen, next to Hong Kong in southeastern China, led authorities to impose strict travel restrictions and testing protocols. As a result of those measures, the Port of Yantian in Shenzhen, one of the world’s largest hubs for container shipping, ground to a halt as dock workers were forced to stay away.

Not only did this result in numerous ships anchored offshore, waiting for Yantian to fully reopen, but many vessels were diverted to other ports, which led to backups elsewhere.

Having eyes on the global commercial fleet, including ships that shut off their transponders, is critically important.

Check out this Ursa co-sponsored-webinar to learn how you can detect and track ships that have gone “dark.” And stay tuned because we’ll be revealing more maritime capabilities related to port monitoring using satellite-based technologies.

The Port of Yantian reportedly reopened in late June, though similar to the Suez Canal blockage, life at sea will take longer to return to normal. 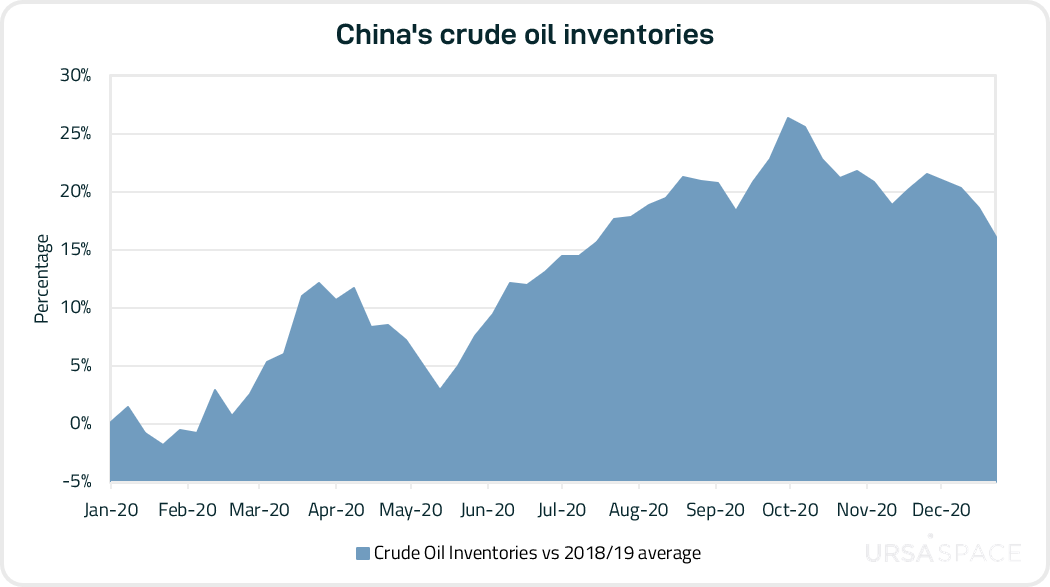 It wasn’t until 2021 that this gap between current inventories and “normal” levels began to close. After steady draws the last three months, inventories now stand approximately 10% above the 2018/19 average, a significant reduction from the October 2020 peak.

For more information on the two datasets mentioned in this blog, click on the links below: