Global crude inventories have begun to show significant increases caused by an unprecedented drop in oil demand, an outcome of the ongoing economic paralysis.

With Saudi Arabia vowing to supply record-high volumes starting next week, the trend of inventory builds looks set to continue.

How much more room even exists until storage reaches maximum capacity?

Ursa monitors over 4 billion barrels of storage capacity at locations around the world every week. Measurements are calculated using radar satellite imagery.

Our latest data for the week ending March 26 shows the amount of crude oil in storage at 2.5 billion barrels.

That equates to 61% capacity utilization, which is the highest rate since our data began in 2017.

Global capacity utilization ranged from 55% to 59% over this period until March when the upper range was broken a month after inventories began to rise steadily.

The table below shows inventory levels as a percentage of capacity:

The source of inventory builds began in China, as expected, considering the path of the coronavirus outbreak.

Even though China builds have continued, a very modest rise for the week ending March 26 could signal refinery activity has begun to pick up.

Shandong Province is home to most of China’s independent refineries. The collapse in local demand hit these refineries hard, though media reports indicate processing rates have begun to recover the last few weeks.

Another factor to consider is opportunistic buying at depressed price levels. Even if refinery activity returns, inventories could still rise if China believes the time is right to stock up.

That could explain the significant increase in Ningbo at tanks considered part of China’s strategic petroleum reserve (SPR).

Inventories are increasing elsewhere in Asia, like Singapore, where stocks jumped the week ending March 26 to the highest level on record.

In the Middle East, Saudi Arabia’s inventories have increased significantly, a likely sign of tanks filling in preparation for next month’s supply deluge.

Over the last two weeks, Ras Tanura is up 7.7 million barrels (+23%), while Yanbu is 9.4 million barrels higher (+35%). The two sites are major export terminals on the Persian Gulf and Red Sea.

This could be further evidence of Saudi Aramco preparations for next month. But it also raises the question: who is going to buy all this oil?

The destination for much of this unwanted oil will be storage.

There is a strong financial incentive to place barrels in storage because traders can capitalize from the market structure.

Oil futures are more expensive for delivery at a later date. As long as the difference is greater than the storage costs, then a trader can make a profit.

The chart below shows the difference between crude oil futures for delivery next month and 12 months down the line. 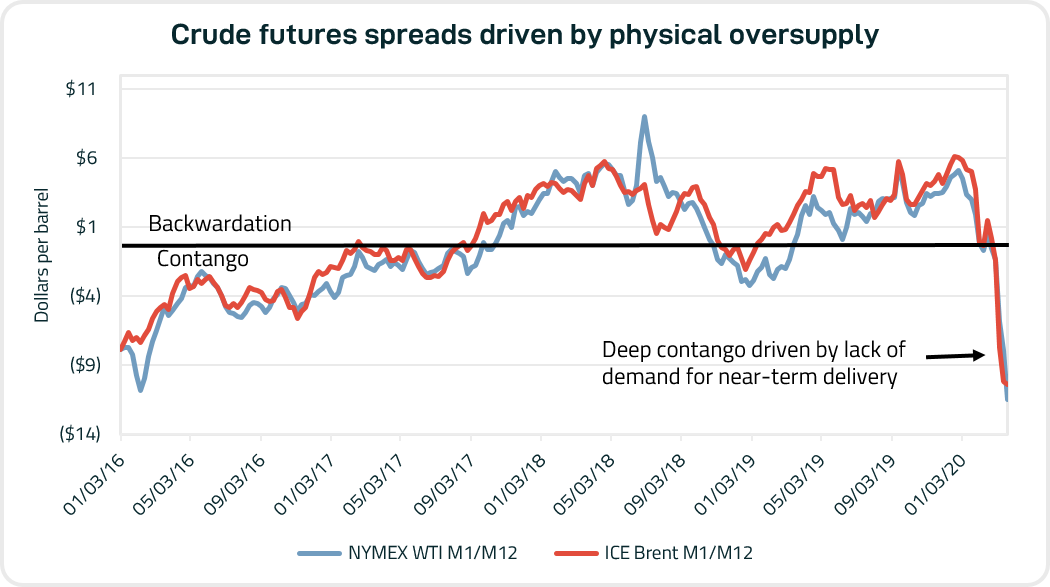 Storage costs around the world have increased 50%-100%, according to Reuters, as traders compete for available space.

The storage cost per barrel at Cushing, Oklahoma, a major storage hub and delivery point for the NYMEX WTI futures contract, has more than doubled since the last month to 55 cents per month.

However, the price spread is still more than enough to cover the storage costs. At last check, the NYMEX crude’s first-month contract was almost $3/b less than the second-month contract.

There’s room left to fill. Cushing is at 40.6 million barrels (46% capacity), according to Ursa measurements.

But tanks will likely be filling fast, leaving traders looking elsewhere. One preferred location is the Caribbean.

As a region, spare capacity exists (see table above), though talk of brisk leasing activity means this might not last long.

If you’re interested in these trends, then please sign up for a free evaluation of our data.