Using Ursa inventory data, we recently noticed and monitored a new trend in the European region. 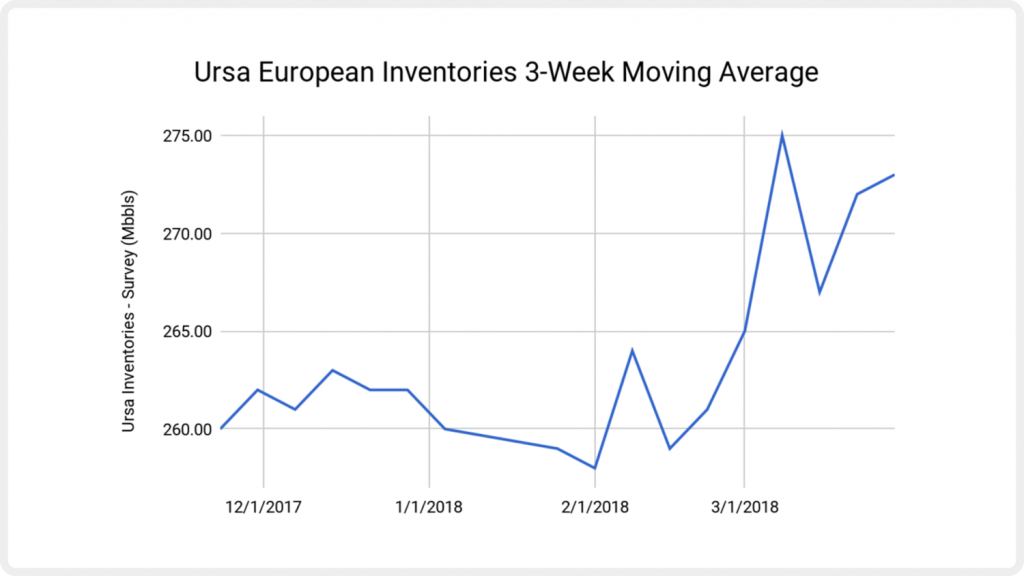 Between Feb 1st and Mar 1st of 2018, we see that Ursa’s sampling of inventories has shown a total build of 12.08 million barrels, 5.74 million barrels of which occurred in Rotterdam alone.

Ursa surveys 18 key locations within the European region to judge general inventory movements. Focusing on the red box above, we can clearly see the jump throughout the month.

Why might we be seeing this massive increase in inventories?

One straightforward answer could simply be that there is decreased seasonal demand for oil, resulting in the accumulation of inventory. Another potential reason for this inventory surge is that import levels for European countries could be very high, causing them to store more oil. It can also partially be attributed to the refineries in turn-around for planned maintenance, as noted in the recent IEA outlook report.

Ursa’s standard European Oil Storage product monitors 18 key hubs, which include Rotterdam (Netherlands), Antwerp (Belgium), Fos Sur Mer (France), and Milazzo (Italy). In the coming weeks and going forward, we will be able to compare our current findings to institutions like the IEA to compare and contrast our direct measurements with their estimates.