If you could have a bird’s eye view of industrial hubs in the world, offering valuable insights into the state of the global economy, which ones would you choose?

A large percentage of global economic activity is concentrated in a few dozen places where goods are made, stored and transported.

By monitoring these hubs directly, you can get an early pulse on economic indicators, rather than waiting weeks or even months for official government data to be released.

In this blog, we list five economic hubs that are key to understanding the global economy, and demonstrate how satellite imagery can provide the tools needed to monitor them.

A strategic investment: Located across the Hangzhou Bay from Shanghai, the Ningbo-Zhoushan port has ranked as the world’s busiest port for 12 straight years, a feat accomplished partly by the investments made as part of China’s ambitious development strategy.

The Ningbo-Zhoushan port plays an important role in the Belt and Road Initiative (BRI), an infrastructure plan to connect China with the rest of Asia, Europe, and Africa through a network of land and maritime routes.

In late 2017, Ningbo-Zhoushan’s annual cargo topped 1 billion tons, the first port to ever accomplish this feat. 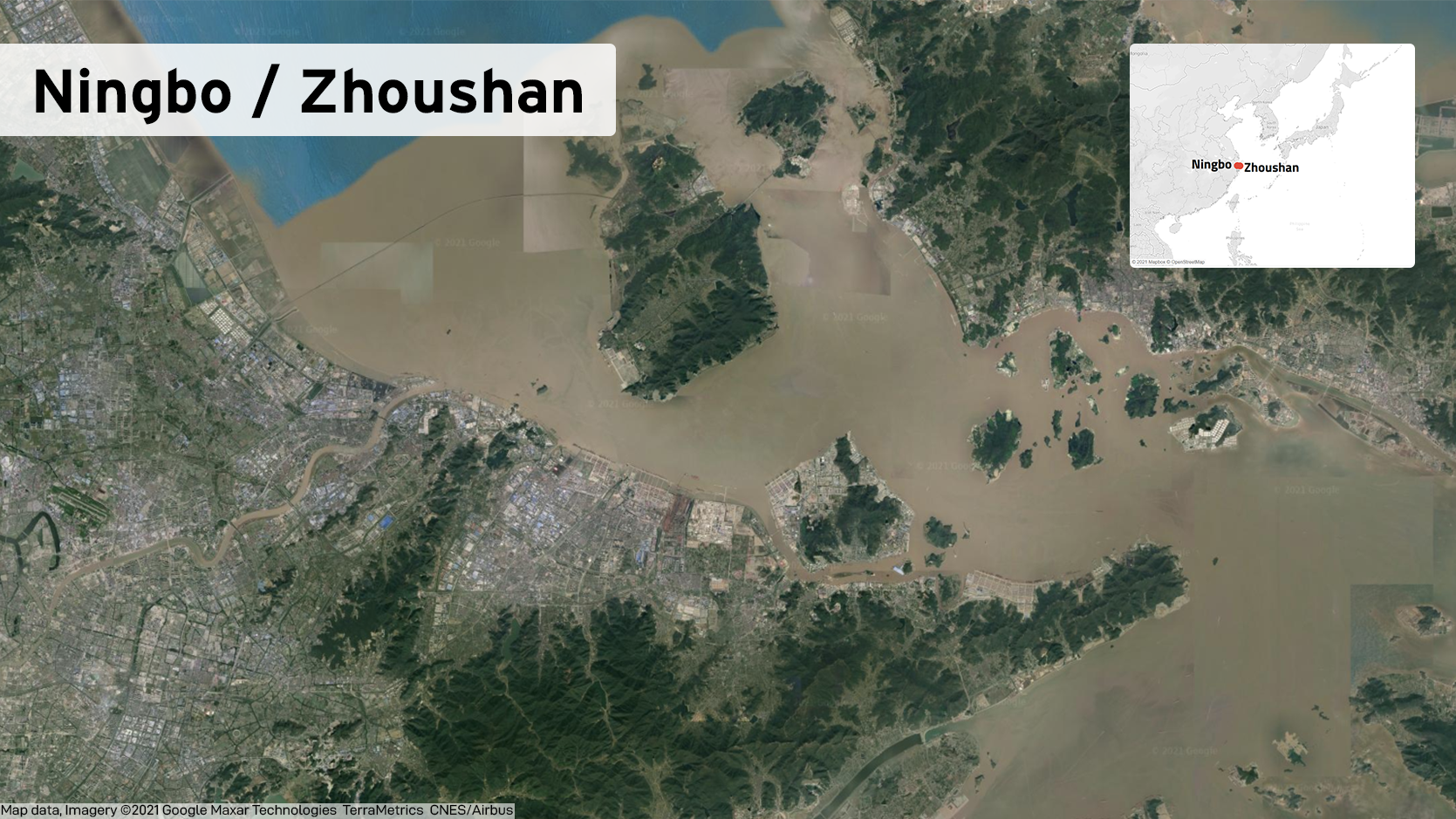 The port’s role also includes facilitating internal trade. It’s close to the Yangtze River, a critical waterway for much of inland China. And there are railway connections linking Ningbo-Zhoushan with 54 cities, creating efficient sea-rail services.

A shortage of semiconductor chips forced Hyundai to suspend production at the Ulsan No. 1 plant from April 7 to April 14, part of a broader problem roiling the auto industry in 2021. 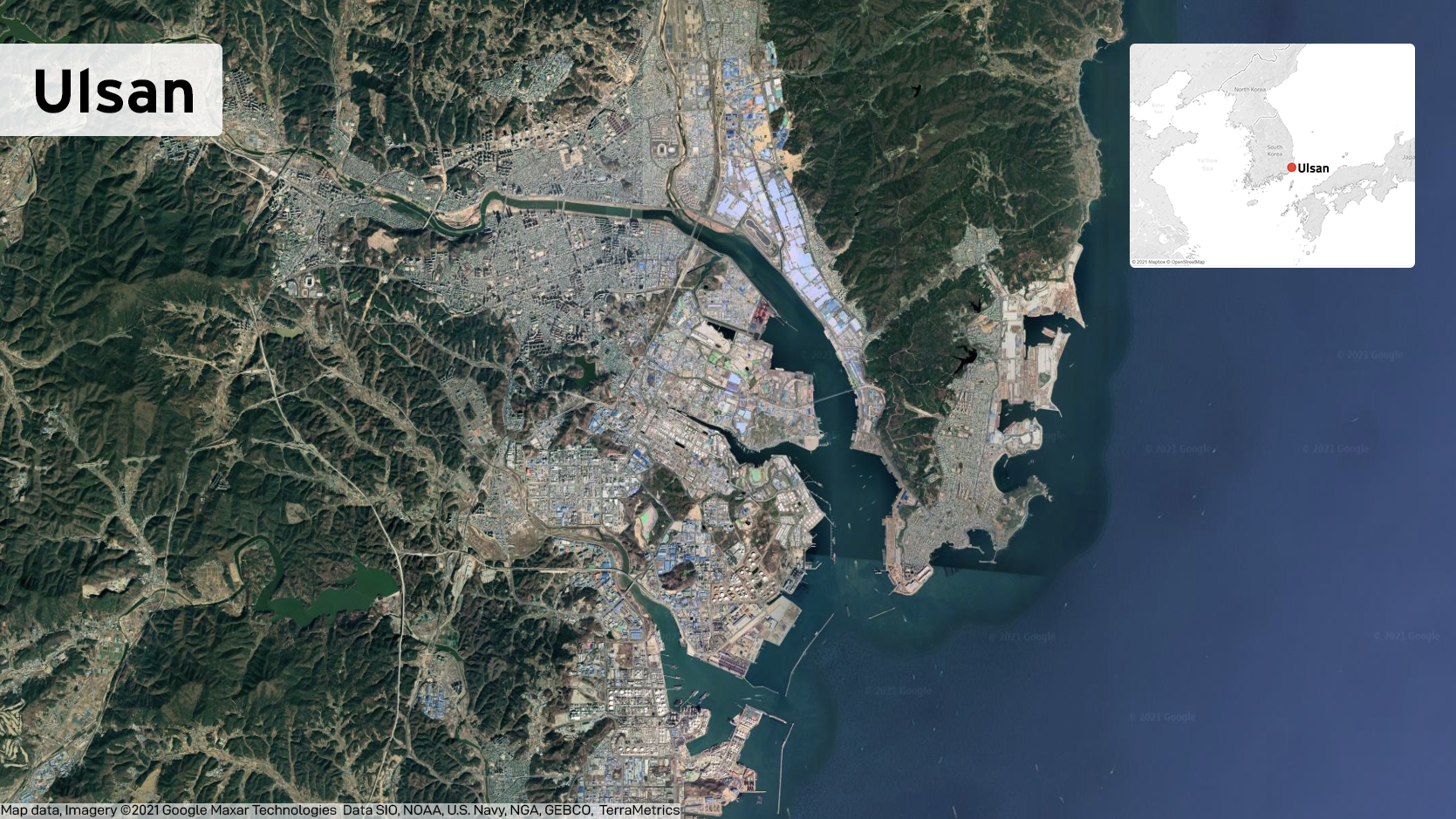 Ulsan’s other major industry—ship building—has been on a similar ride, weathering last year’s turbulence when new orders fell sharply, only to run into a new problem caused by the chip shortage.

Hyundai Heavy Industries operates an enormous shipyard in Ulsan that stretches over 4 kilometers along the coast of the Mipo Bay. The entire facility employs over 60,000 people, churning out a new ship—roughly the length of three football fields—every 4-5 days.

Satisfying the appetites of millions: Located on the shore of Bohai Bay, Tianjin is the primary port of Beijing, which is approximately 110 km away.

Tianjin is a large city in its own right, with a population of 15 million people. Coupled with 21 million people in Beijing, the metropolitan area ranks as one of the biggest in the world.

With so many people comes many mouths to feed. The demand for meat is more than the amount local suppliers can provide, which means imports are needed to fill the gap. 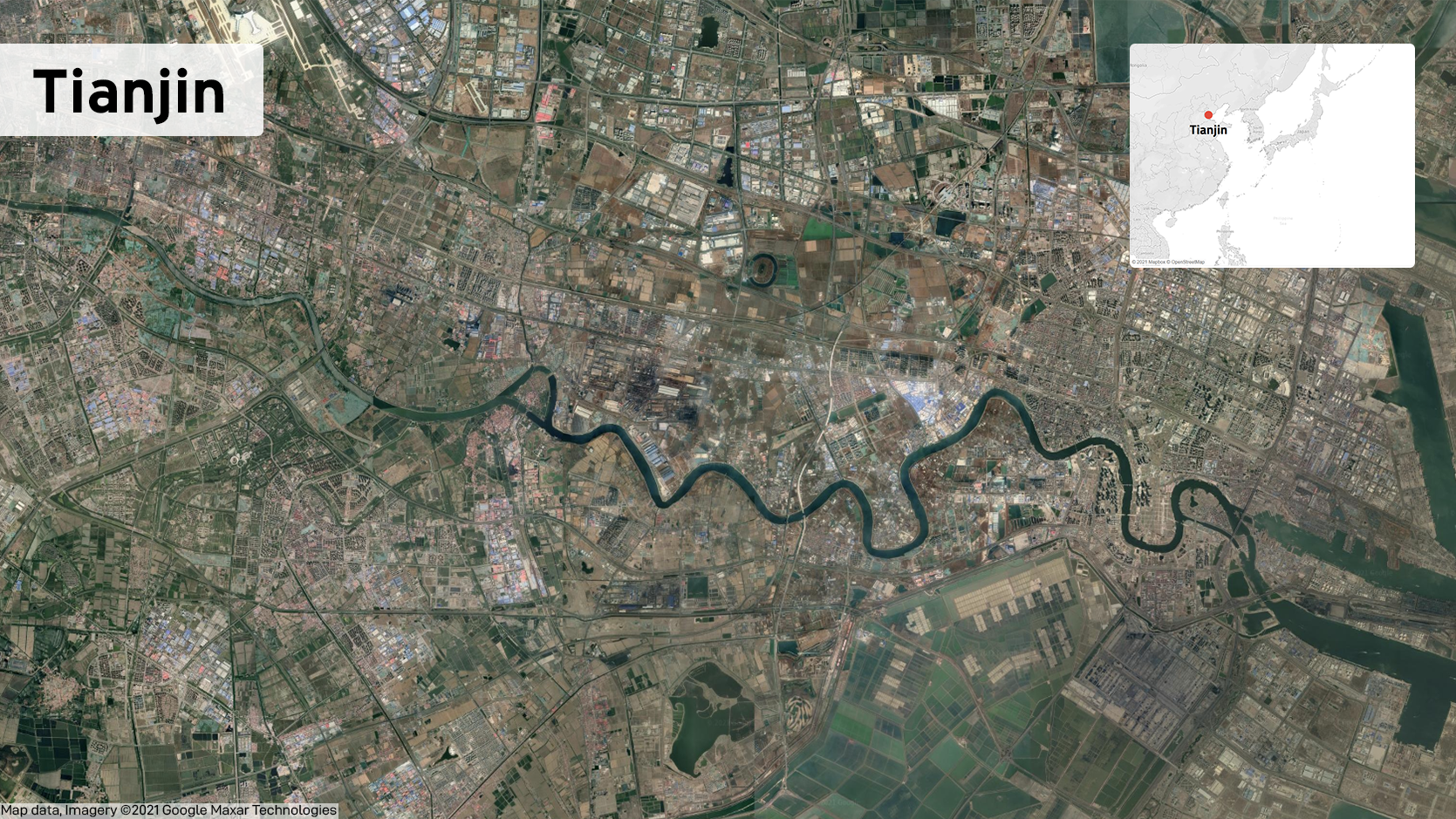 China is the world’s biggest buyer, with many of the goods arriving via Tianjin. Last year became very difficult for meat exporters, like the US and Brazil, when China began testing imports of chilled and frozen meat and seafood for the coronavirus in June, including at Tianjin.

Trade came virtually to a halt, though the situation has since improved. In March, China imported 1 million tons of meat, the most since January 2020. One contributing factor has been a deadly hog disease that decimated China’s ability to produce its own pork.

Gateway to Europe: Located next to the North Sea, Rotterdam is Europe’s largest port and the largest port outside Asia.

Rotterdam is a major player in the oil and petrochemical markets. There are five refineries in the port complex, including Europe’s largest, Shell Nederland with a capacity of 404,000 barrels per day. 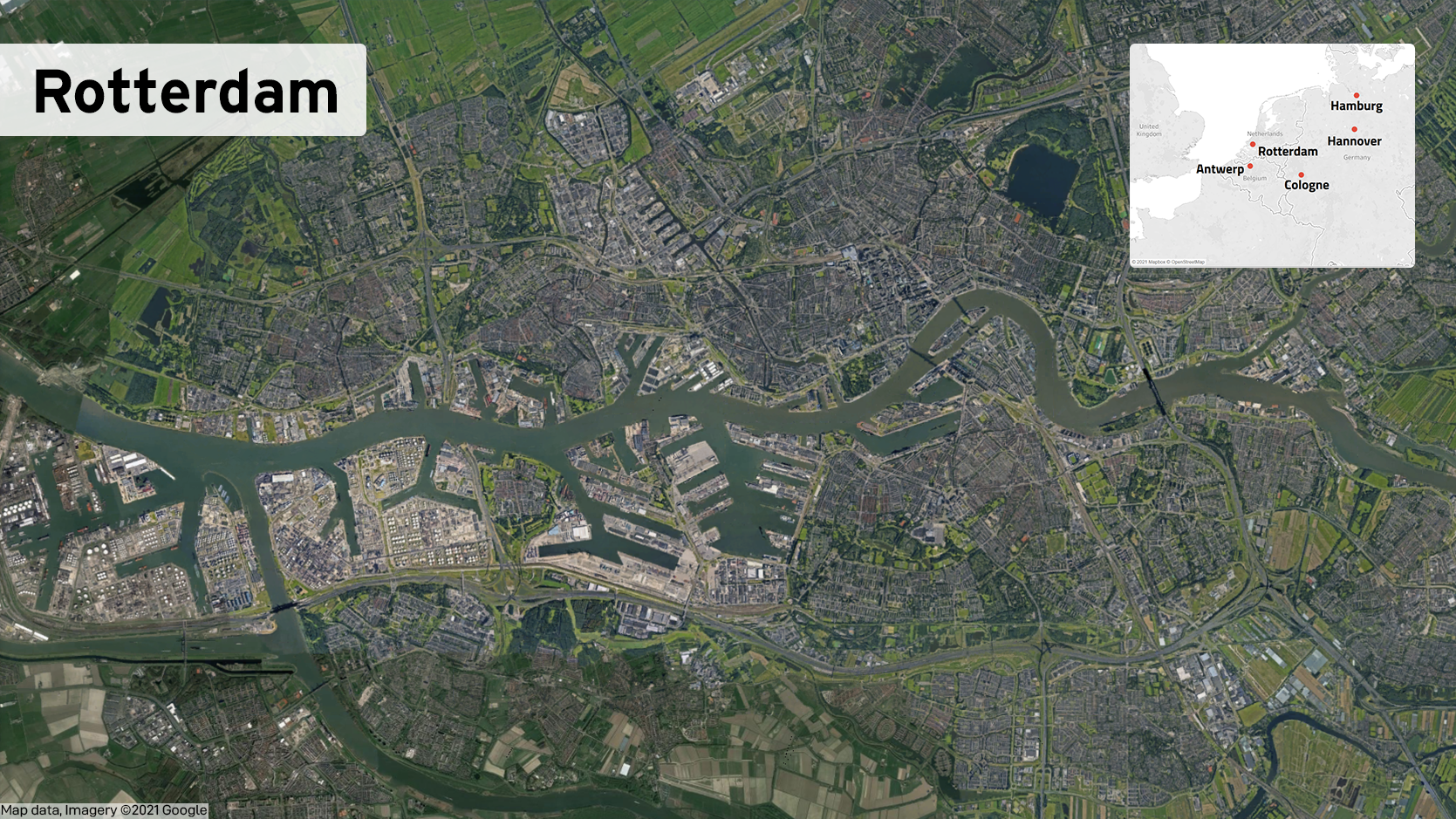 Roughly one-half of the crude oil arriving in Rotterdam stays at Rotterdam. The other half is shipped by pipeline to refineries in the Netherlands, Belgium, and Germany. This combined network represents one of the three largest fuel hubs in the world.

Rotterdam’s connections to northwest Europe extend beyond pipelines. Situated at the mouth of The Rhine, goods flow between Rotterdam and Germany’s industrial heartland.

The Rhine-Ruhr region includes mid-sized cities, such as Bonn, Cologne, Dortmund, and Essen. As a whole, the densely populated area plays a significant economic role, encompassing more than 11 million people and 26 of Germany’s 50 largest companies.

An energy powerhouse: Located on Galveston Bay, Texas City is one part of the sprawling oil, gas & petrochemical complex along the US Gulf Coast, accounting for more than one-half of the country’s refining capacity.

The region has become the main outlet for US energy exports, a dramatic transformation enabled by the rapid increase in oil & gas production, particularly in Texas.

The US still imports a lot, but net imports have declined steadily since 2006. Last year, the US was a net annual petroleum exporter for the first time since at least 1949. 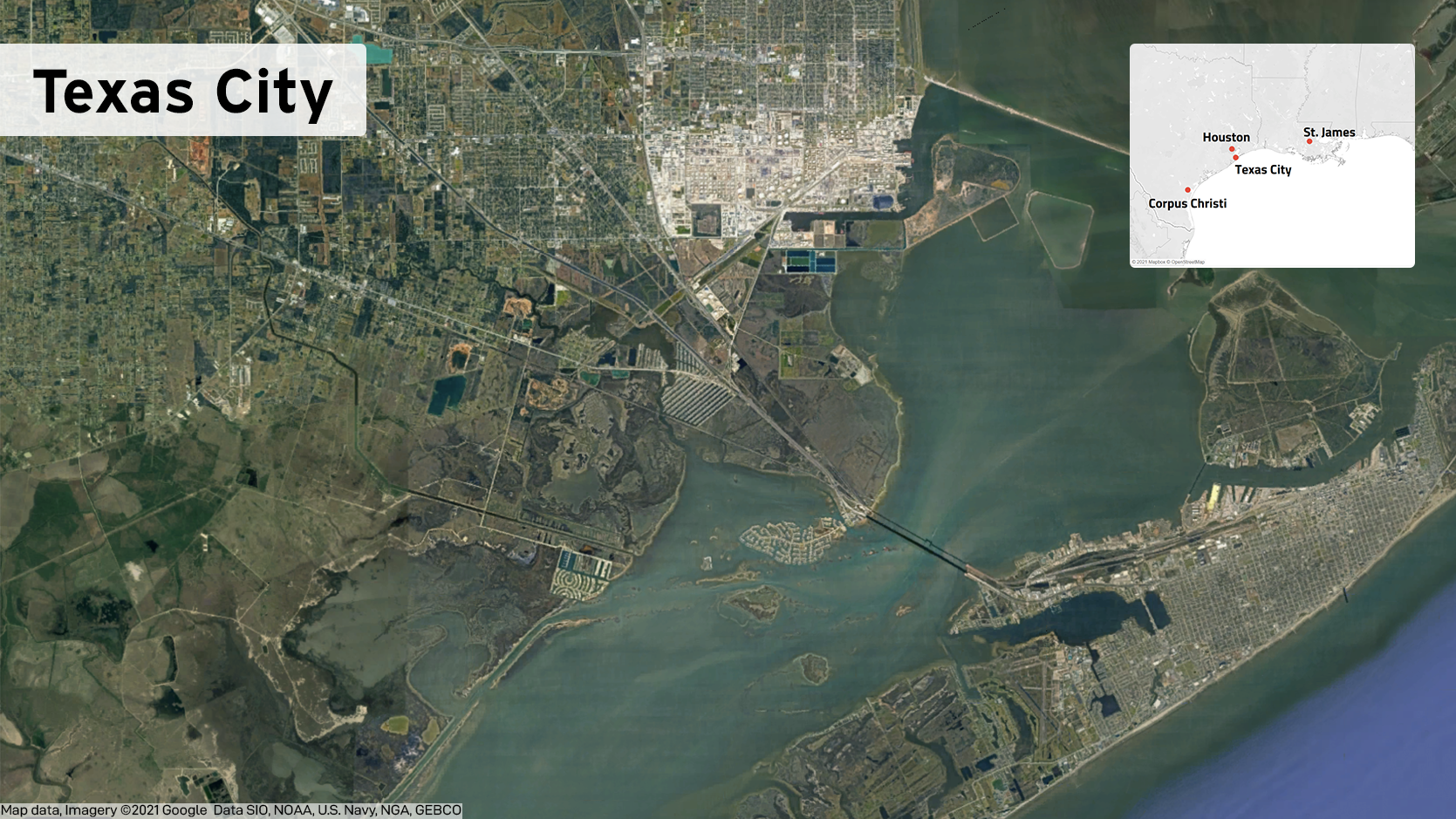 The more the US produces, the more it can export. But export volumes are also a function of global demand, making US Gulf Coast flows an important indicator of broader economic conditions.

Fortunately, there is a way to monitor places, including the economic hubs listed here.

Ursa Space uses radar satellite imagery to measure physical changes at these locations, and many more, offering data on oil inventories, auto manufacturing and port activity. The illustration below shows the breadth of our coverage: