One of the biggest economic themes to emerge in the first half of 2021 has been the surge in prices across a range of goods, from lumber and housing, to metals and food.

The same dynamic is at play in every instance: supply has been slow to catch up with growing demand, as life in many parts of the world slowly “returns to normal,” causing shortages.

The chart below shows the dramatic rise in prices. It plots the The S&P GSCI, a widely-followed barometer of commodity prices, the S&P GSCI Soybean index and the S&P GSCI Industrial Metals index. 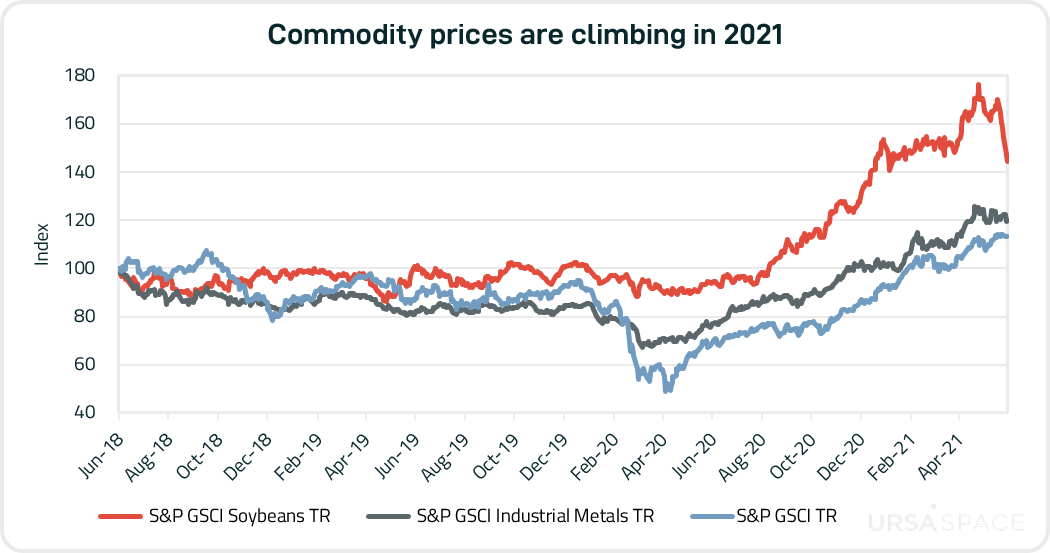 With an eye on inflation, the Federal Reserve on June 16 moved forward the date for lifting interest rates from 2024 to as early as 2023.

In this blog, we focus on insights revealed through a pair of datasets created by Ursa Space derived from synthetic aperture radar (SAR), an all-weather, 24/7 satellite technology.

The two datasets cover crude oil inventories and auto manufacturing, both of which are considered significant sectors of the global economy and can provide macroeconomic signals.

The graphic below shows our global coverage for crude inventories, auto manufacturing and port monitoring, which we’ll discuss in future blogs (stay tuned!).

Crude oil prices have increased recently, translating into higher prices at the pump. Global benchmark ICE Brent is close to $75 per barrel, a level not seen since late 2018, and up from about $50/b at the start of 2021 and nearly doubling year-on-year.

The best indicator of the global supply-demand balance is the amount of oil in storage. Ursa Space measures approximately 20,000 storage tanks every week, totaling more than 6.6 billion barrels of total capacity in 123 countries.

Ursa Space data shows global crude oil inventories peaked in October 2020. Since then, they have dropped below 2020 levels, and even returned to 2019 levels for the same time of year, which are a better indication of “normal” conditions. 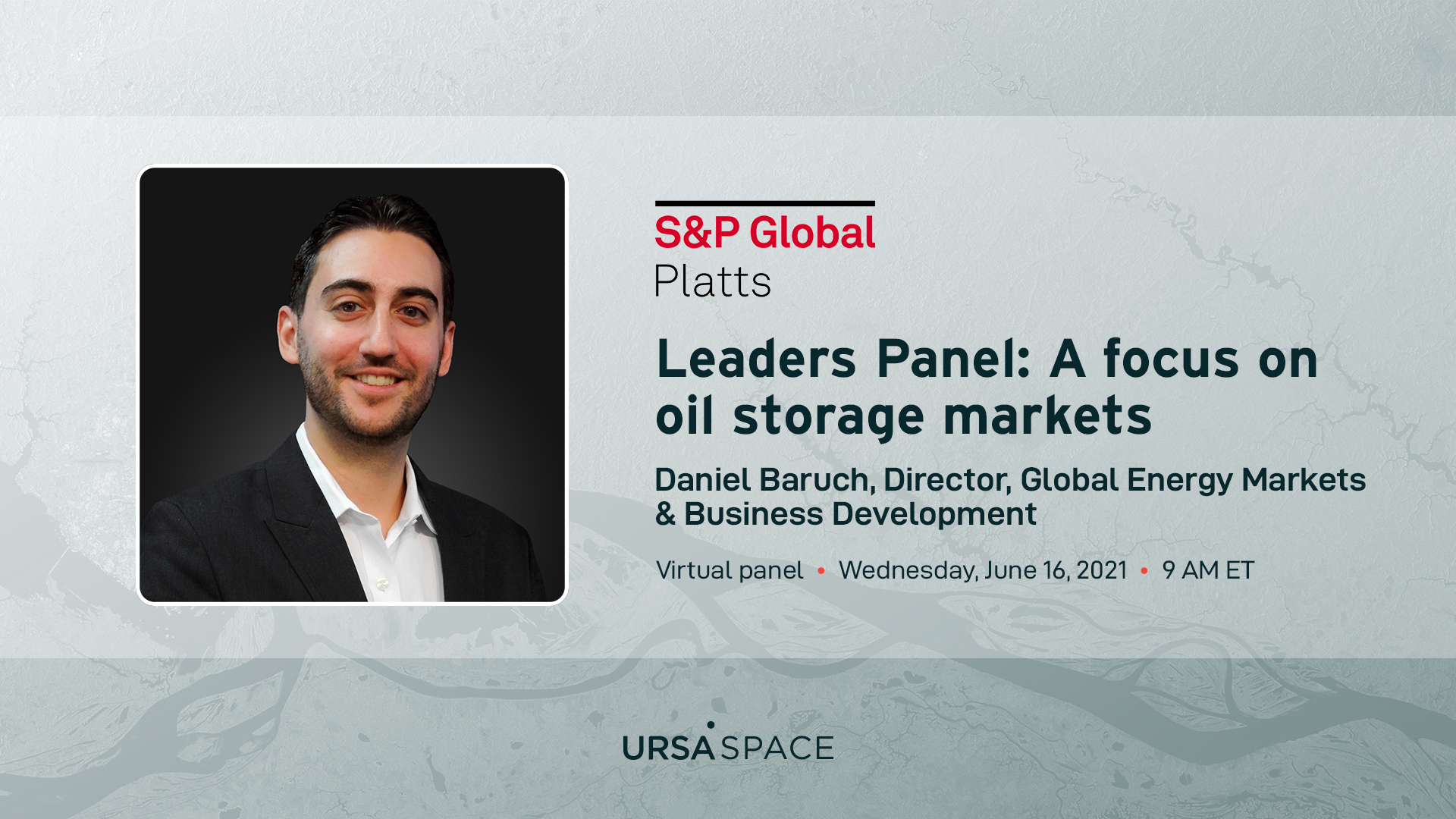 Other takeaways from Daniel included:

Another important datapoint has been Caribbean crude inventories, a region that serves as a barometer for broad oil market conditions. Current storage levels are the lowest since May 2020. Read more in this Bloomberg article citing our data (terminal subscription required).

Auto makers have been hit hard in 2021 by the global shortage of semiconductors, an essential component for new vehicles, a topic we discussed earlier.

How long will the shortage last? How badly will auto manufacturers be hurt? Which ones will fare worse than others?

To answer these types of questions, Ursa Space monitors auto factories around the world for observable, physical activity that can signal changes in production. The list includes sites in:

For more information, you can watch a short video or check out this story map. 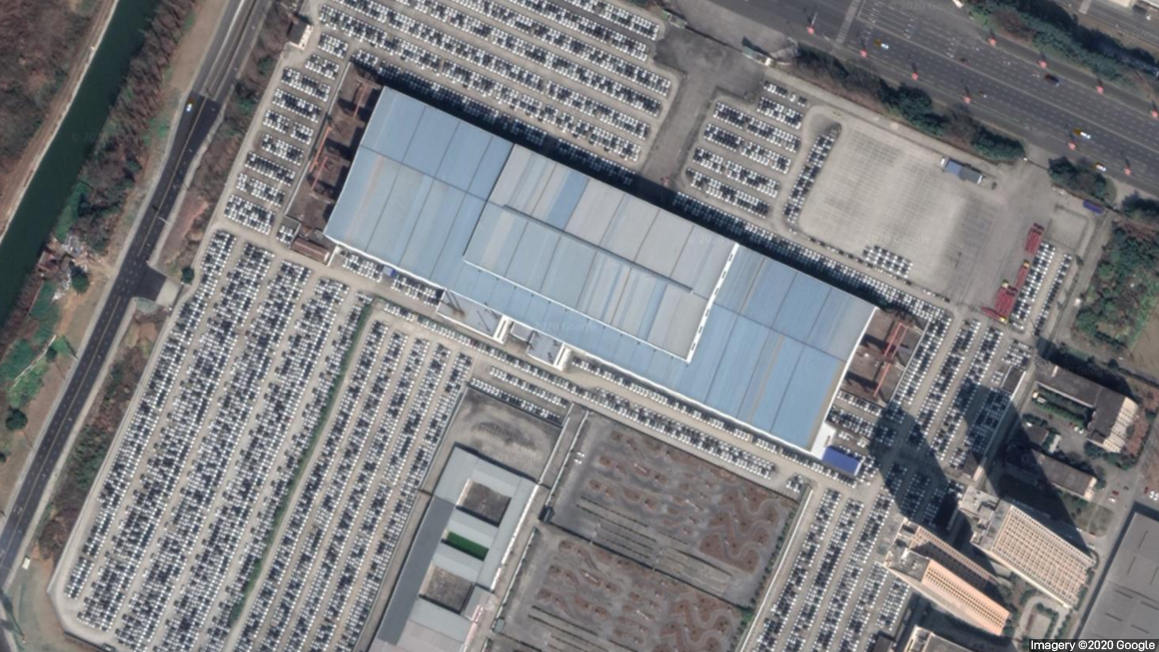 What do recent trends show?

In light of the semiconductor chip shortage, wreaking havoc on the auto industry, it’s important to note that the Global AMI fell this month to its lowest point on record, according to our data going back to the start of 2016.

This marks a turnaround after the Global AMI recovered in late 2020, signaling at the time that the auto manufacturing sector had survived the pandemic and could steadily rebound.

To be fair, not every country could be said to have entered a state of recovery (e.g., Brazil, India), though the likes of China and the United States helped paint a relatively rosy picture for the industry as a whole heading into 2021.

After a nosedive in the first quarter of 2020, China’s AMI bounced back and remained stable for the remainder of the year. Though it began to drift lower in early 2021, it wasn’t until June that China’s AMI plunged, driving the Global AMI lower.

What do you think happens next? Have we entered a period of higher inflation? Or will supply catch up with demand once the backlogs caused by the pandemic are sorted out?

In the meantime, let us know if you’d like to learn more about this or any of our other products and capabilities.