While no injuries or fatalities were reported, last month’s dam collapse was a reminder of the dangers involving aging infrastructure around the world combined with the onset of more frequent extreme weather events.

This summer alone has seen historic rainfall in Europe and central China, raising the need for accurate and detailed information on flooding as soon as it occurs.

A reliable method leverages synthetic aperture radar (SAR), a satellite-borne instrument that works in any weather, day or night. This 24/7 capability is an obvious selling point when trying to document the flooding extent in the middle of a storm.

We’ve demonstrated this before in the case of major storms, such as Hurricane Irma in Florida and Hurricane Dorian in the Bahamas, as well as an environmental disaster stemming from a tailings dam collapse in Brazil.

We’ve also provided other examples that haven’t involved flooding, but have similarly shown detection of the presence of water. One case revealed the filling of a controversial dam in Ethiopia, while another measured changes in the size of Iraq’s reservoirs.

In this piece, we apply the same technique, turning SAR imagery collected over China’s Inner Mongolia into flooding analytics that can yield valuable ground-truth information.

The SAR images below capture the Inner Mongolia dams (circled in yellow) on July 6 and July 18, the day of the collapse. The darker patches denote water, allowing you to see the reservoirs behind the dams, local rivers, as well as the flooding extent.

The differences between the two images are visibly stark, with floodwaters inundating the area on the latter date.

As mentioned, a SAR-based approach is necessary given the time constraints and weather conditions related to this event.

Another option—optical satellite imagery—is ineffective in this case because of cloud coverage and/or lack of daylight.

The optical satellite image below was taken over the same area two days after the collapse, and clouds still obstruct the view, making this approach infeasible.

Also, the SAR data can be used to create a detailed flood map that can be used to support emergency service response, and insurance companies can use this information to assess claims and improve their modeling of flood zones around the world.

In the SAR-based map below, we illustrate the areas where flooding occurred, overlay information on population centers, and summarize the sequence of events that began with historic rainfall in the region resulting in the collapse of the Yong’an Dam and Xinfa Dam. 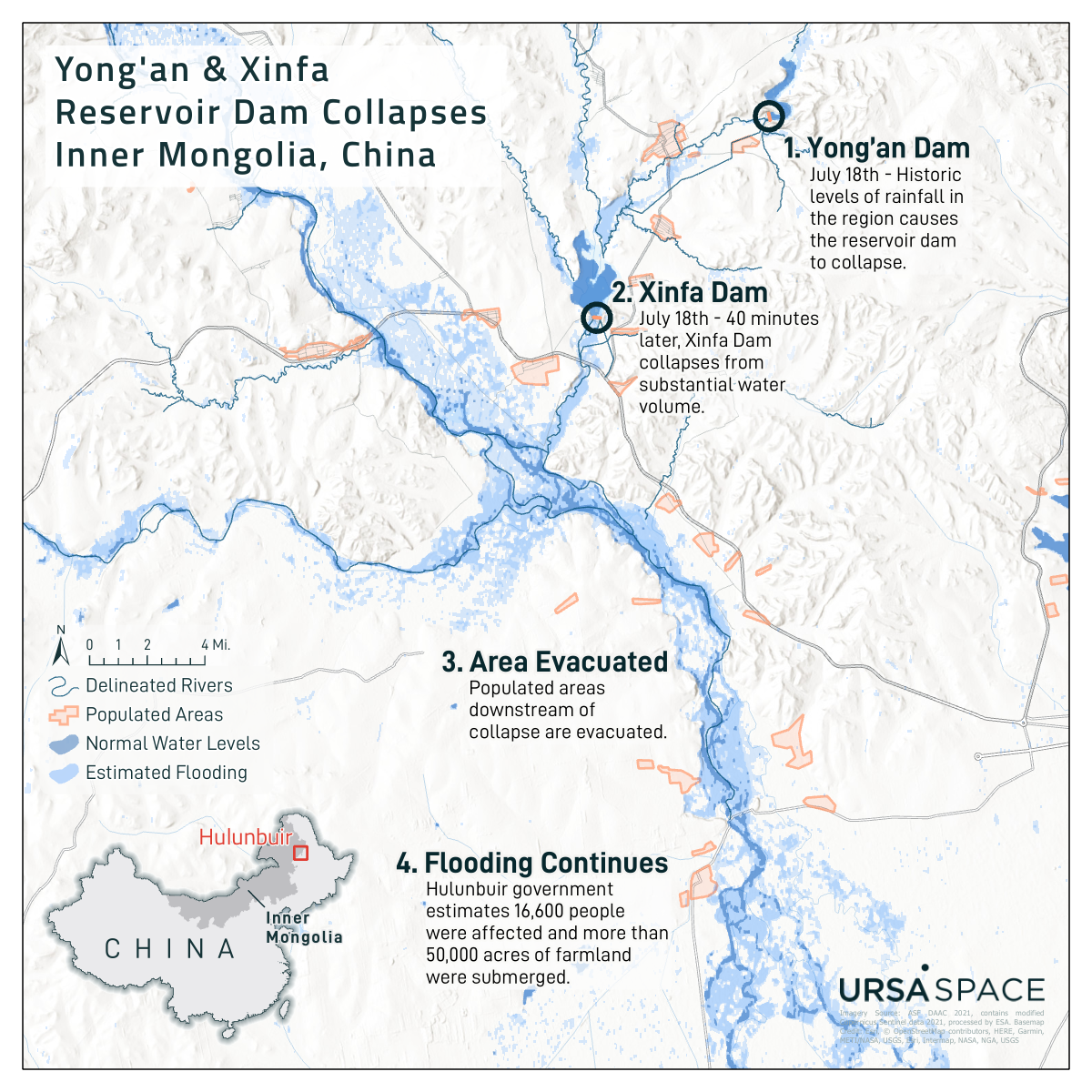 How big of a problem is dam integrity? Very big. China has more than 98,000 dams, and government officials have acknowledged more efforts must be made to ensure the safety of these structures.

Beijing has allocated almost $24 billion to reinforce 2,800 large and medium-sized reservoirs and 69,000 small ones.

Nor is this risk limited to China. A comprehensive study released in January 2021 by the United Nation University (UNU), the academic and research arm of the UN, called attention to the growing dangers of aging dams.

“By 2050, most of humanity will live downstream of large dams built in the 20th century” that are at “increasing risk of failure,” the UNU report says.

Are you interested in learning more about how Ursa Space can help monitor flooding events?

Let us know! We’d love to hear from you and get started.