An Update on Oil Market Fundamentals

Oil prices have been on a rollercoaster ride over the past year, being pulled in different directions based on the latest sentiment about the global economy amid the coronavirus pandemic and vaccination rollout.

But what do the fundamentals say? What is the supply-demand balance? How has it changed since last year when the outbreak began?

In this blog, we provide an update on oil market fundamentals, drawing insights from the following datasets created by Ursa Space using satellite radar imagery.

ICE Brent, the global oil benchmark, flirted with $70 per barrel this month, hovering around levels last seen in early January 2020 before the pandemic began.

However, recent headlines about rising COVID-19 cases in Europe and a slowdown in vaccinations slammed the breaks on oil prices, which had been rallying for months.

Additionally, time spreads have come under pressure, with the prompt ICE Brent spread around $0.20/b, down from almost $0.70/b at the start of March.

The NYMEX WTI prompt spread is also weaker, moving into contango. Refinery outages have been a key driver, resulting in inventory builds.

The next two graphs plot ICE Brent and Global Crude Inventories, as a percentage of their respective January 2020 averages, from February 2020 to February 2021.

An inverse relationship exists between oil inventories and prices. That means an increase in oil inventories implies supply is greater than demand, which should drive down the price, and vice versa.

What’s interesting to note is that inventories since the start of 2020 can be broken down into two halves: a period of builds (February–September) followed by a period of draws (October–present).

After bottoming in April, oil prices increased until the summer, but then stalled until October when inventories began to draw, providing a sustained catalyst for prices moving higher.

Here are a few other conclusions that can be drawn:

The start of a third coronavirus wave in Europe certainly doesn’t help matters. Unless the outlook changes, further price declines could be in store, as travel restrictions and lockdowns raise concerns for oil demand.

Even worse, a drop in oil demand could coincide with more supply coming online. As the graph below shows, a significant amount of production was removed from the market starting 2020, in response to lower oil prices. 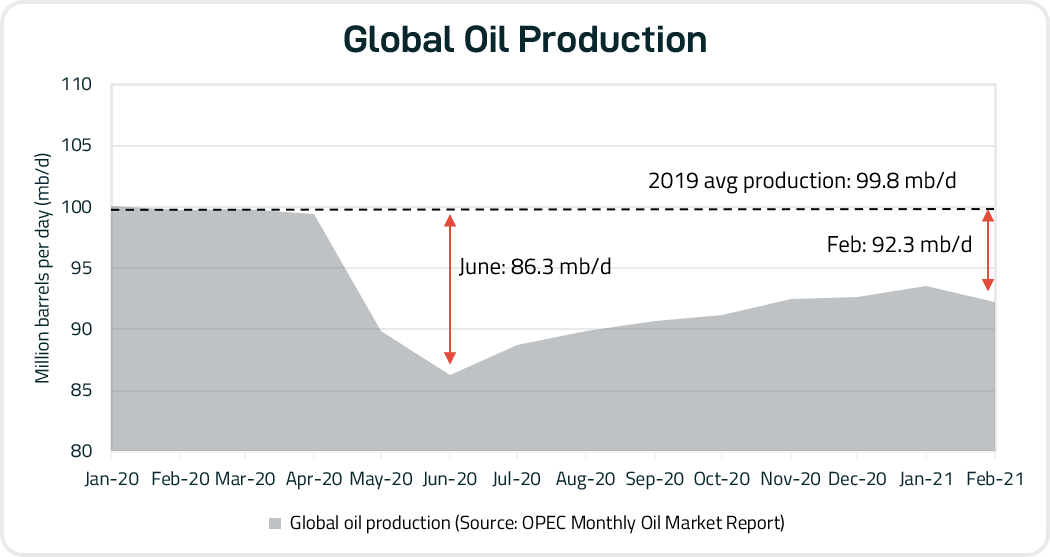 Global oil production averaged 86.3 million barrels per day (b/d) in June, down from approximately 100 million b/d in 2019 and the first four months of 2020. Despite a slight uptick since then, production remains well below pre-pandemic levels.

What comes next will depend partly on a group of oil producers, known as OPEC Plus, that has voluntarily curtailed supply since last year.

OPEC Plus reconsiders its production policy every month, and while their agreement remains in place, cracks have formed within the coalition.

Saudi Arabia is cautious over the market’s ability to handle more supply, and therefore wants to maintain production cuts, while Russia appears ready to increase output.

The other wildcard is US shale production, which has been deploying drilling rigs back to the field.

In the Permian Basin, the epicenter of US shale production, the rig count equaled 212 on March 12, up from a low of 123 on September 18, according to Baker Hughes.

Ursa Space’s Permian Basin activity index measures the fullness of these lots—the score rises when more equipment is stored and drops when equipment leaves (i.e. dispatched to the oil field).

The graph below plots the Permian Basin activity index against the rig count, showing the inverse relationship between the two. 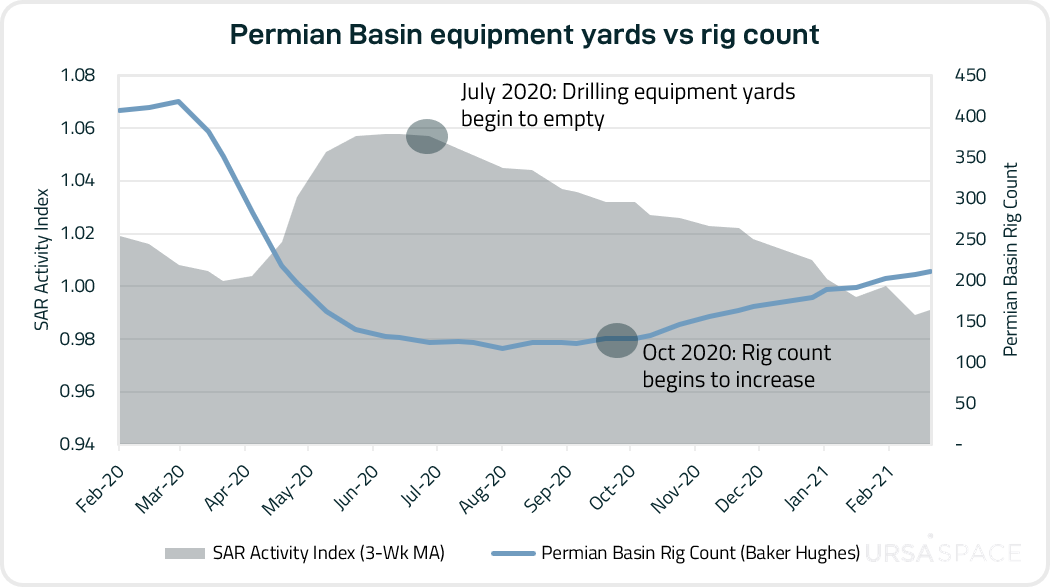 After a significant increase in April–May, the index began to decline in July, which provided a leading signal for the rig count. The number of active rigs in the Permian Basin began to increase three months later in October.

The index has continued to fall in 2021, indicating the rig count is likely to keep increasing for now. How much will oil production increase by?

One recent factor that offset the increase in drilling was last month’s historic cold snap across the United States, especially in Texas. US oil production fell by 500,000 b/d in February to 10.4 million b/d, according to the Energy Information Administration (EIA).

What do you think? Will crude oil inventories continue to decline, supporting higher prices? Or has the rally come to an end for now?