Was Qatar ready for the FIFA World Cup? 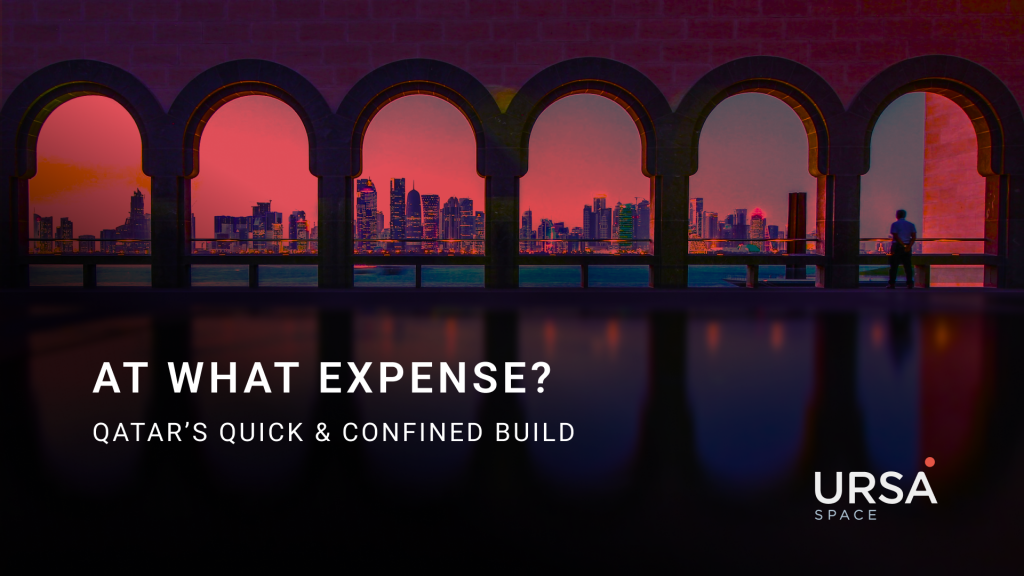 Argentina’s thrilling victory over France on December 18 was instantly hailed as the most exciting FIFA World Cup Final ever played.

It won’t be easy for future tournaments to eclipse that level of excitement, or the price tag associated with organizing the 2022 edition.

Qatar spent an estimated $220 billion to host the World Cup. Massive investments in infrastructure were required, including the building of seven new stadiums. The only existing stadium was Khalifa International, which held only 45,000 spectators.

Issues outside the pitch

Building these stadiums is no small feat. This involves many changes in urban infrastructure, whether at the stadium site or in surrounding areas.

To investigate the magnitude, let’s use Ursa Space’s Non-Coherent Change Detection (NCD), one of the change detection tools offered as one of Ursa’s capabilities. We’ll focus on the areas around the Ahmad Bin Ali Stadium, the Education City Stadium, and the Khalifa International Stadium for this exploration.

An NCD algorithm compares two images, a reference image and a match image, and finds changes related to the reflections. The reference image is noted as the raster dataset that occurs during the most distant past; the match image is a more recent dataset. 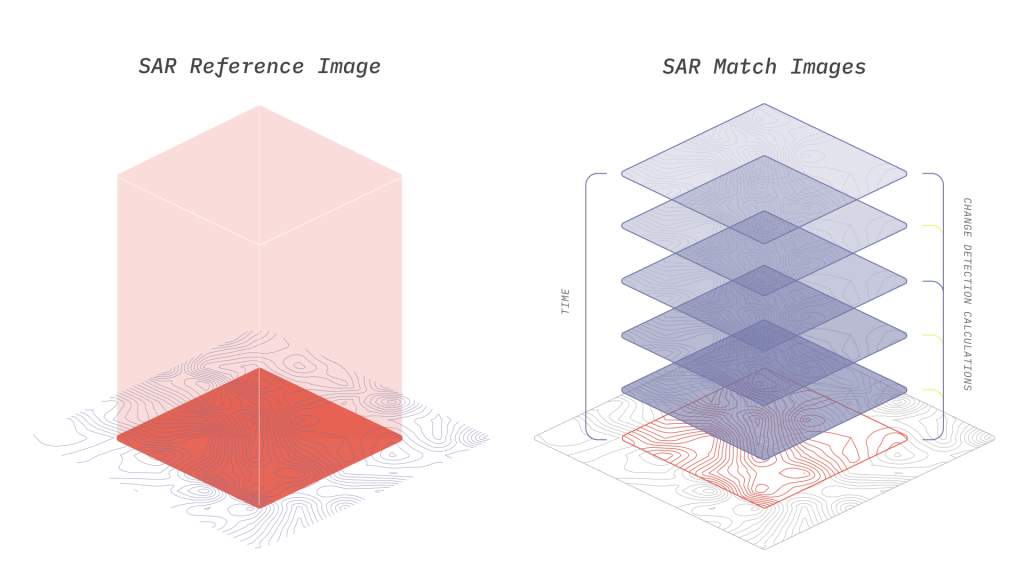 Al Rayyan served as the main location for these additional stadium builds. Based on this satellite image, we can see there is a lot of urban infrastructure in the area, but we cannot see where the most change has occurred.

Instead, we use synthetic aperture radar (SAR) data which can capture imagery in all weather conditions, day or night. We stylize the data into a heatmap to see where the hotspots are. The NCD algorithm is using two images: a reference image from March 2019 and a match image from November 2022.

It looks like most of the change has occurred around the Ahmad Bin Ali Stadium because of the darker hotspot. Now, what happens if we were to stylize the data into a format that shows us where exactly the changes took place? 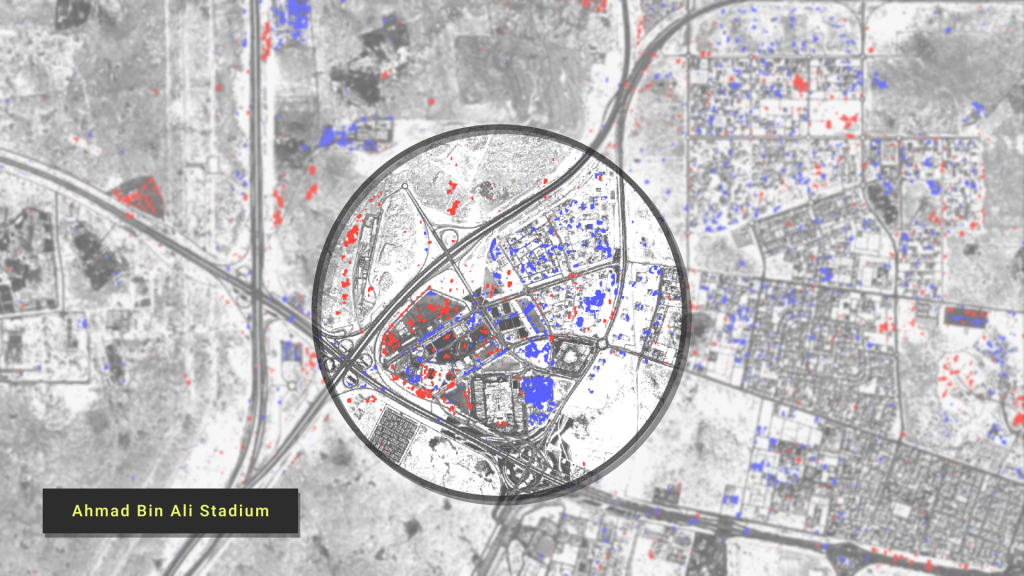 That looks better. What do all the polygons represent, though?

Think back to earlier in the post where arrivals and departures were discussed. That means any new infrastructure is represented as the arrivals (i.e. the blue polygons) and anything temporary that has disappeared is represented as the departures (i.e. the red polygons). Therefore, it looks like most of the detected changes were departures, meaning there wasn’t a lot of new infrastructure.

What about the Education City Stadium? According to the heatmap from the first image, it doesn’t look like there were significant changes. 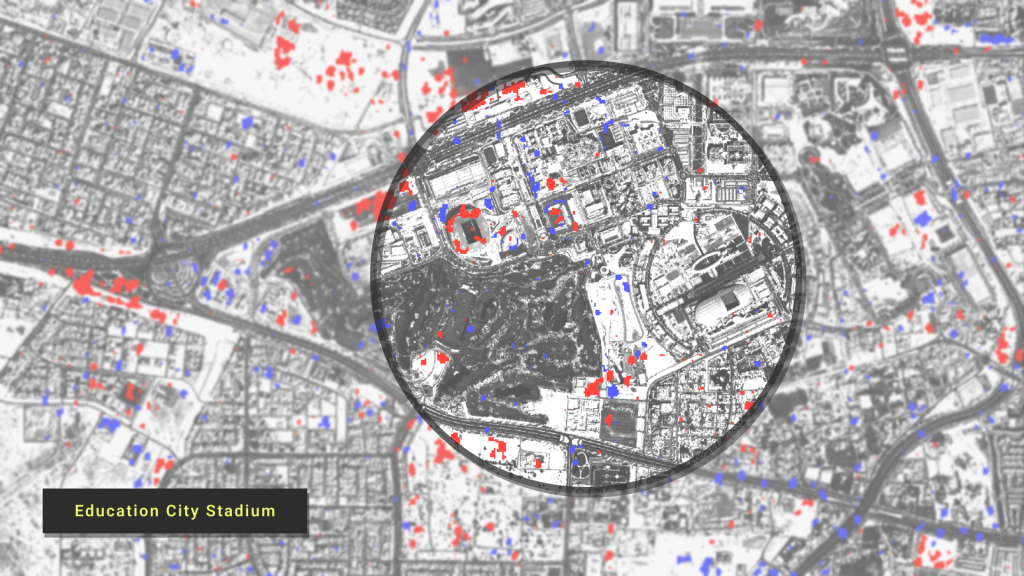 As confirmed by the above image, there are pockets of new and old changes, but nothing dramatic.

Let’s compare this to the Khalifa International Stadium, a site where we don’t expect to see a lot of new changes. 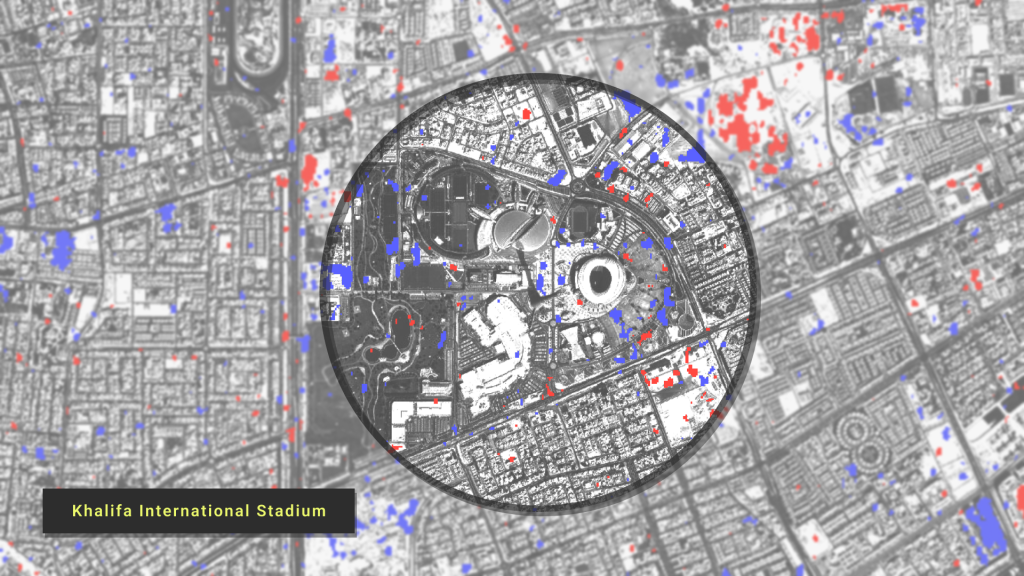 As expected, there are few arrival detections found by the NCD tool, which equates to a low level of new construction around the nearly-50-year-old building.

Using one kilometer buffer zones around each stadium, we can determine how much change has occurred. For example, around the Ahmad Bin Ali Stadium, about 0.1018 square kilometers (or 38 % of total changes in the area) is estimated to be new construction. Below is a table summarizing the results. 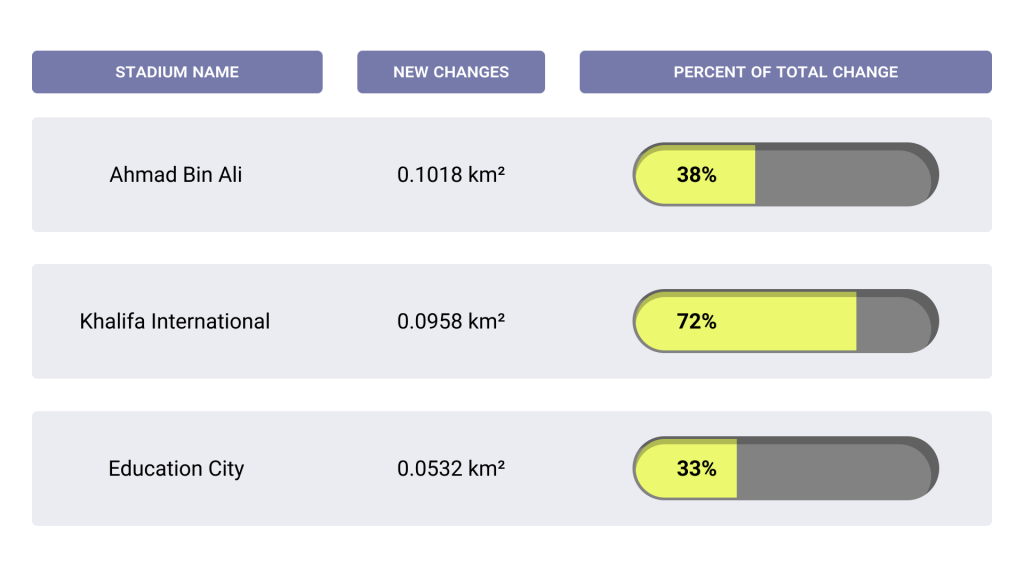 We know that a huge, unknown sum of money has been invested in improving the cities’ infrastructure to accommodate the World Cup. After the final whistle is blown, six of the seven new stadiums will be repurposed — either downsized (Al Bayt Stadium will go from 60,000 seats to 40,000) or recovered for other uses (Lusail Stadium will become either housing, shopping, or schooling).

Surely some foresight in upgrading the surrounding areas would ensure the event spaces could continue hosting masses once spectators leave. But quite the opposite is true. Our analysis shows that these new stadiums, three of which opened in 2020, haven’t seen a lot of improvement in their surrounding areas.

Therefore, we can assume that neither stadium growth nor continued use was a priority for the studied areas.