After a bulk carrier began spilling tons of oil near the southeast coast of Mauritius, creating an environmental disaster in the pristine waters of the Indian Ocean, crews worked to transfer the remaining fuel onboard and prevent further damage.

On August 12, Prime Minister Pravind Jugnauth said almost all the oil had been pumped out, nearly a week after the vessel began leaking.

With the ship in danger of breaking apart, any oil that remained onboard would likely have spilled into the water.

Still, significant damage has been done.

The Ursa team has been monitoring the situation using radar satellite imagery to provide updates on the size and spread of the oil slick.

Our coverage was cited by media outlets, including the New York Times, BBC and two Forbes articles highlighting the role of satellite imagery and the spread of the oil spill.

The MV Wakashio, owned by Nakashiki Shipping Co, was sailing from China to Brazil when the vessel struck a coral reef July 25 near Pointe d’Esny, Mauritius.

A major shipping route from Asia to the Atlantic Basin traverses the Indian Ocean, nearing the island of Mauritius.

However, the MV Wakashio deviated from this shipping lane and headed to the shoreline. The reason why is under investigation.

Figure 1 shows the Wakashio’s path (in red) and other vessels (in yellow) in the vicinity of Mauritius. 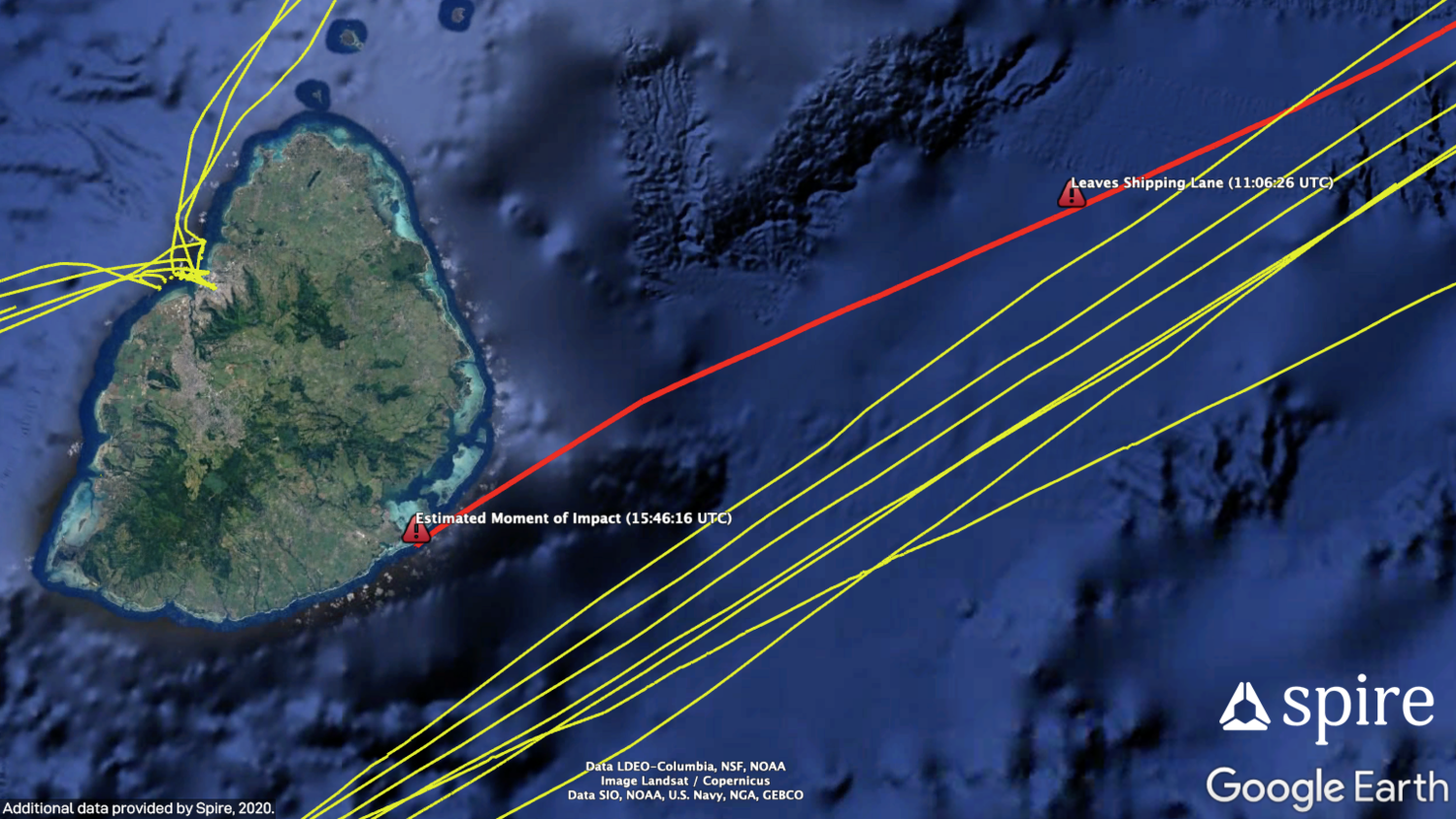 After running aground, the vessel initially appeared stable. Our first analysis, based on an image collected by the European Space Agency on July 29, did not reveal the presence of oil in the area around the Wakashio, consistent with news reports (Figure 2).

Ursa analysis of satellite imagery from today (July 29) shows no sign of an oil spill from a large bulk carrier (MV Wakashio) that ran aground July 25th off the coast of Mauritius. Contact us to learn more about our maritime capabilities. https://t.co/ehQlpagK2P pic.twitter.com/cJuD0clngc 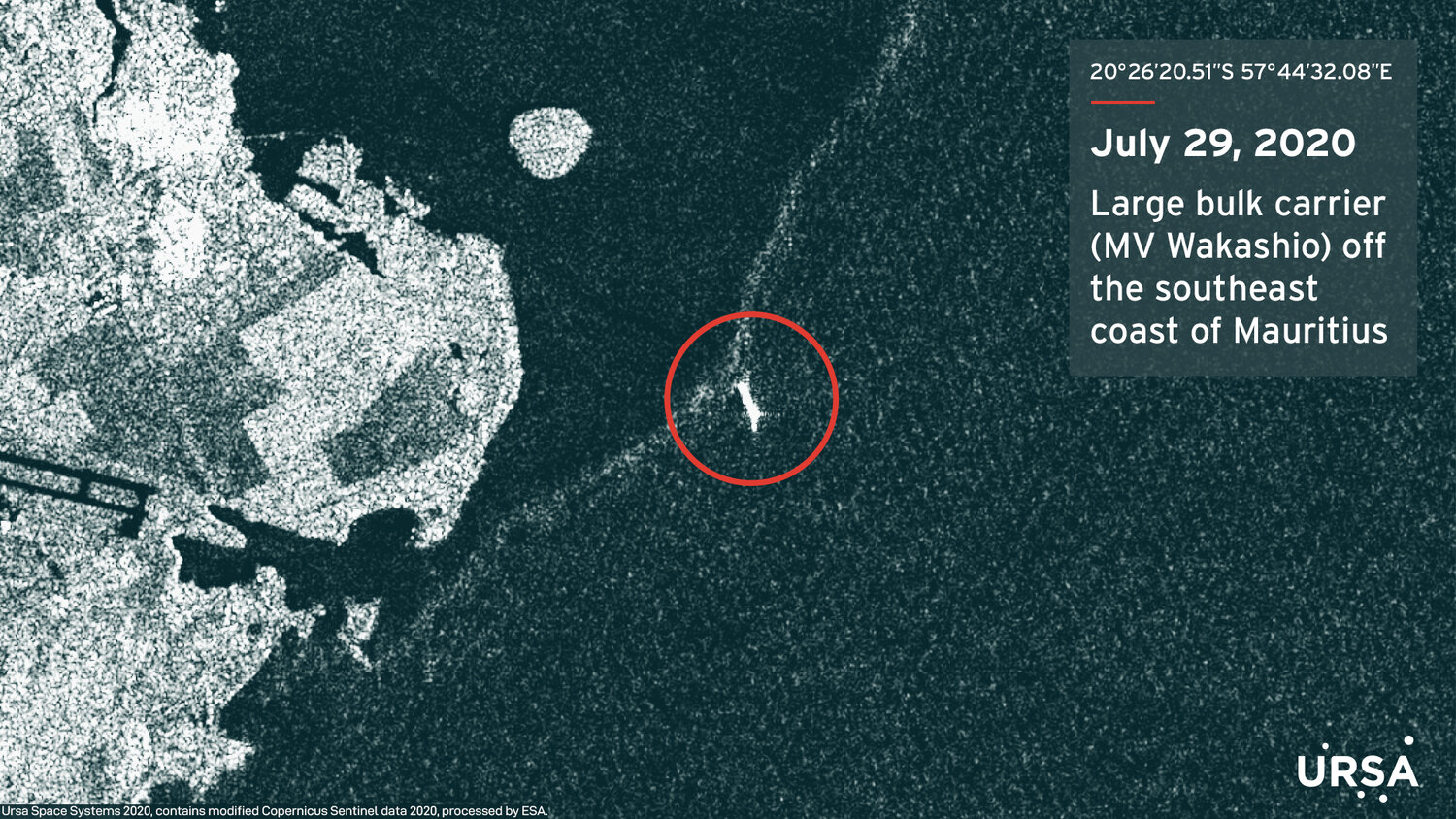 The satellite imagery comes from synthetic aperture radar (SAR), which is not the same as electro-optical (EO) imagery most people are familiar with.

But SAR has its advantages, particularly its all-weather, day/night capabilities, an important distinction when analyzing an area often obstructed by clouds, like a tropical island.

Moreover, an established application for SAR is oil spill detection.

The SAR images featured below were taken by ICEYE, a Finnish SAR operator.

On August 6, 12 days after the incident, the situation had changed. Our analysis showed an oil slick spanning 3.3 square kilometers around the Wakashio.

Figure 3 shows the area colorized red where the surface disturbance is likely caused by an oil slick.

A clean-up operation ensued, but the efforts were mostly in vain as oil continued to pour from the MV Wakashio.

On August 11, the ship owner said the vessel had leaked approximately 1,000 metric tons of fuel oil. 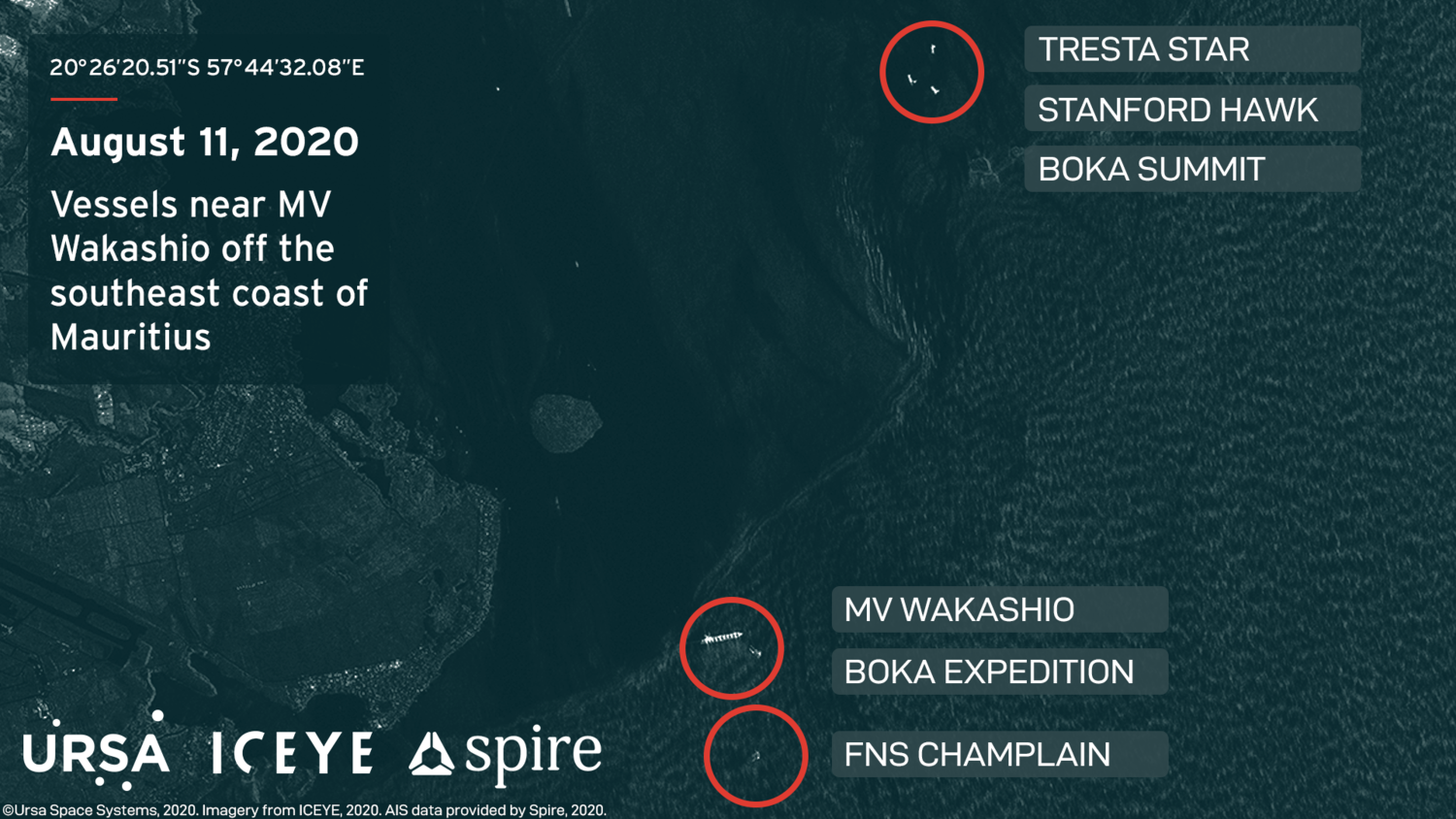 We also took a closer look at the spread of the oil slick, focusing on three areas shown in the map below (Figure 6) 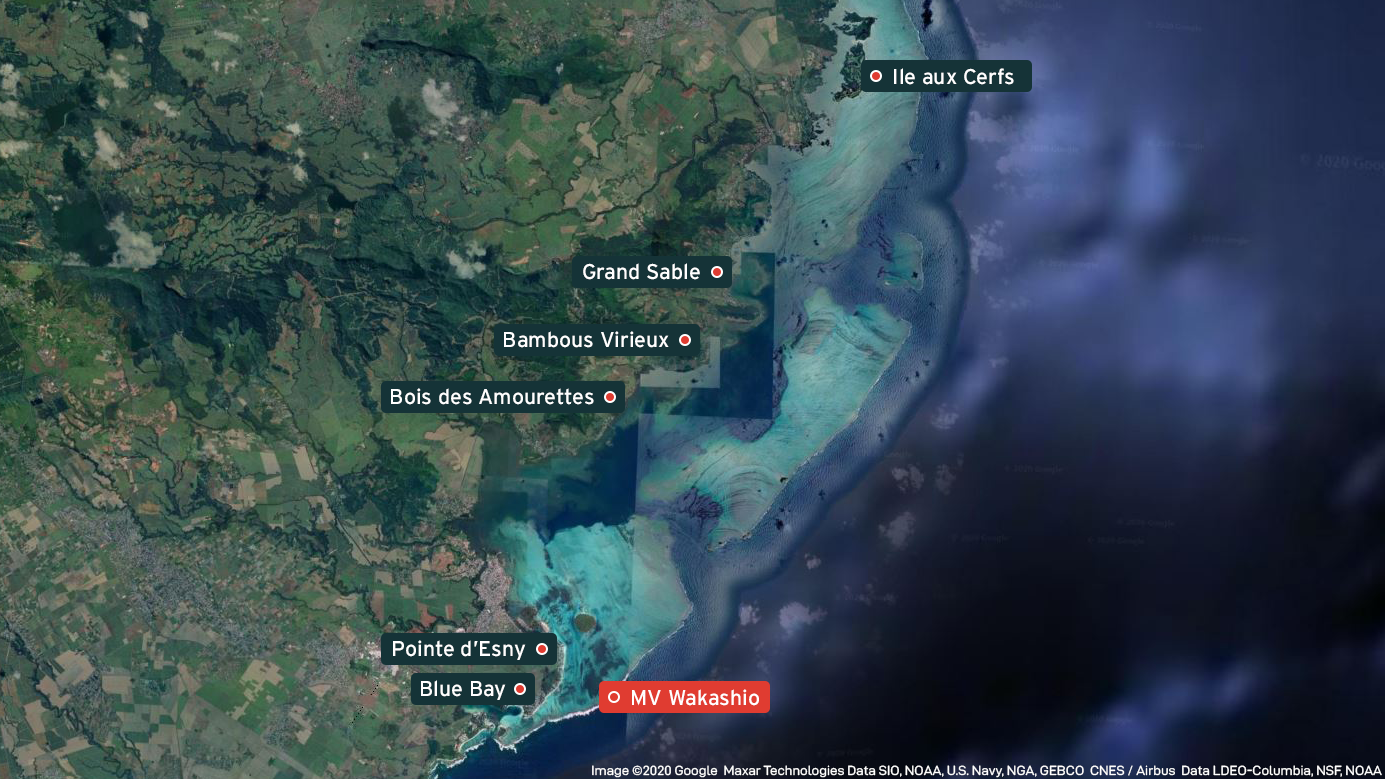 We observed Blue Bay and the surrounding area were significantly impacted by the Wakashio spill (Figure 7). 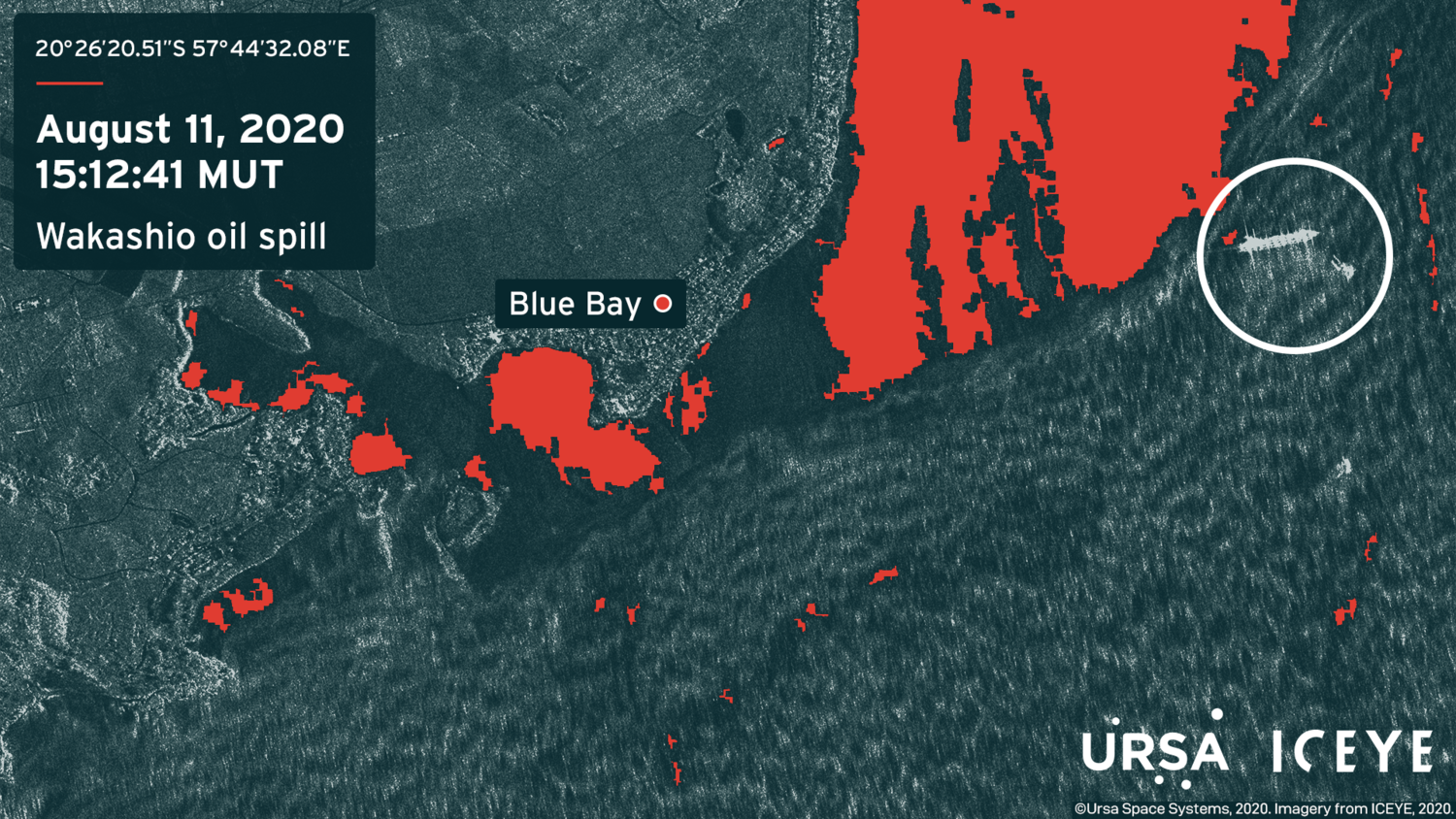 Moving approximately 10 kilometers north, near the town of Bambous Virieux, an area with large aquaculture farms (circled white), our analysis also showed a significant degree of surface disturbance in the water (Figure 8). 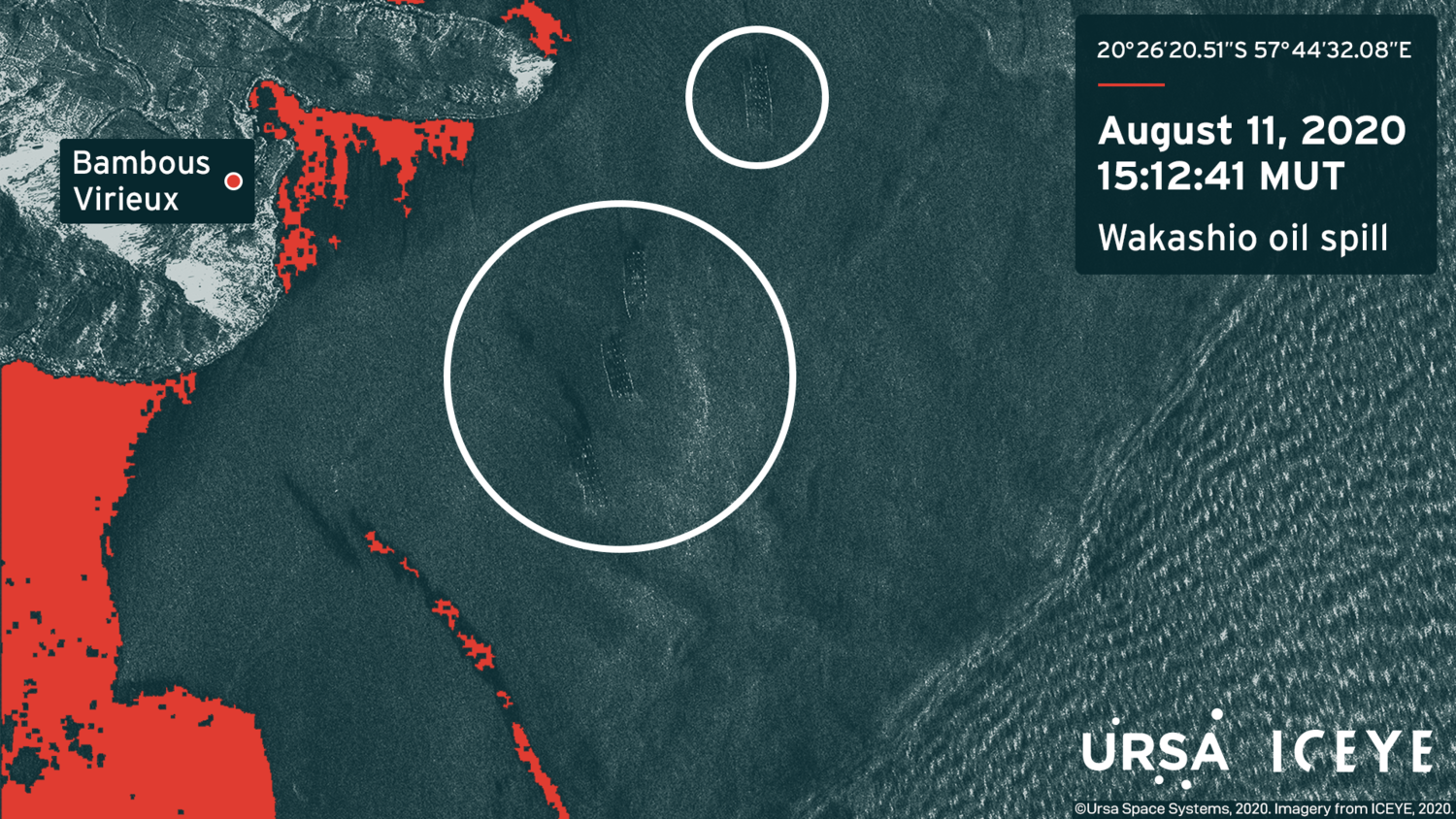 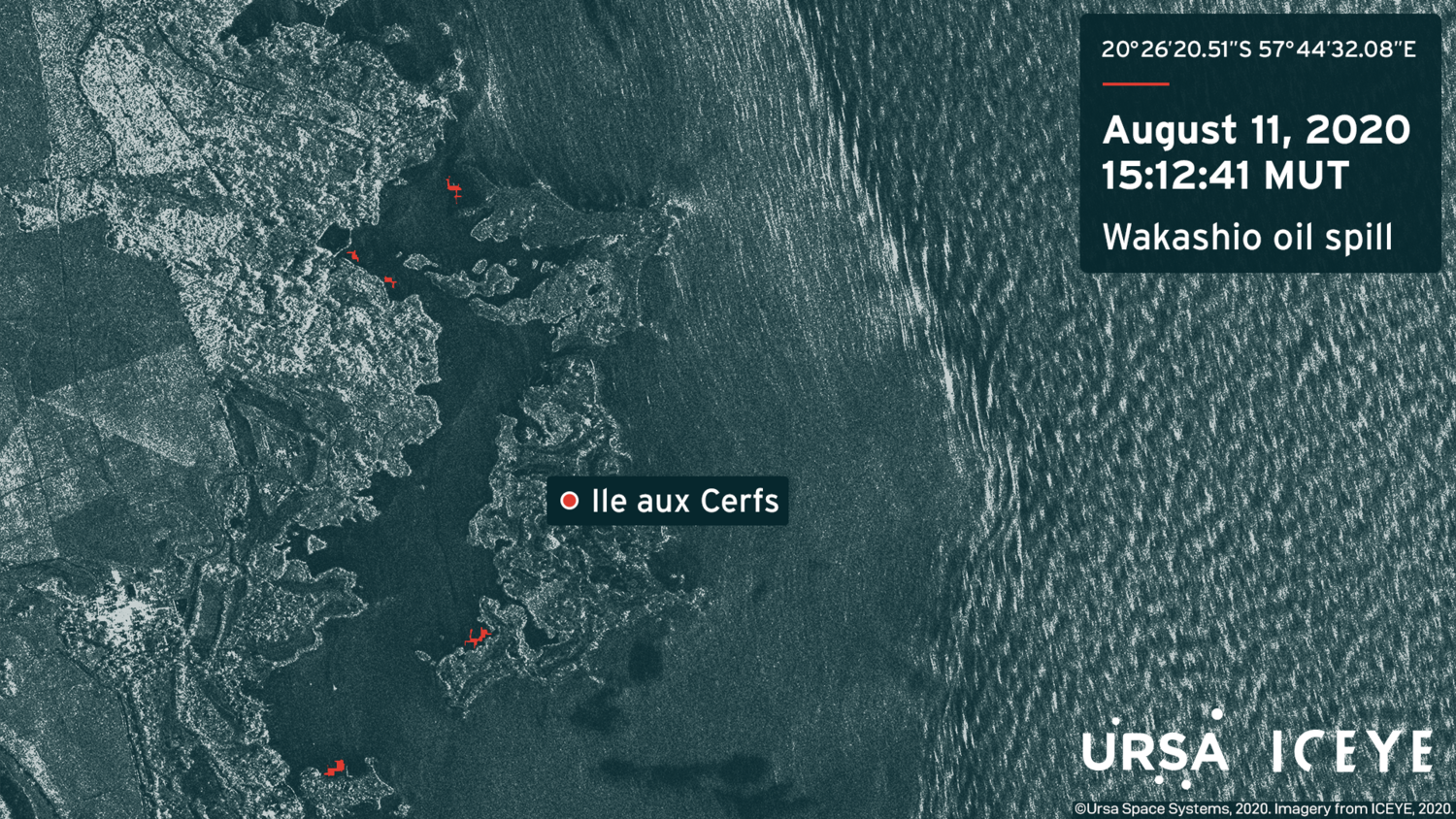 This is a developing story. Check back here for updates and sign up for the blog.